“Our family has been here 5 generations”. Joe is proud to tell you he attended Salina School, Grant, North High school, and the First graduating class at Henninger High School.  He received his B.A. from Syracuse University and a Masters from the Maxwell School of Citizenship in Public Affairs.

“I had an opportunity to stay here, my dad worked at Crucible Steel, my mom at one point taught religious instruction at Our Lady of Pompeii, but we were a big Italian family. I had an opportunity to stay home and attend Syracuse University. I knew from early on that I wanted to work in government. So, I looked government schools. And Dean Campbell who was Dean of the Maxwell School, here I was trying to apply to Harvard and he said, ’why don’t you stay here because the Maxwell School is one of best if not the best in America’, as it is today. “

“I received my first job offer from the City of Syracuse, by Mayor Alexander. They offered me a part-time job which I started before finished graduating. It was a tremendous opportunity I got to work with people like; Ann Michel, Dave Michel, Ed Kearse, Tom Sardino, people who were legends in city government.”

What can people look at and say, Joe did this? 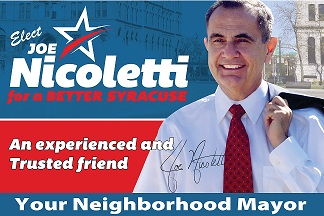 “Let me give you two sets, something you can point to in concrete, I’m going to also talk about policy. Clinton square, it took 17 years, it started under the Alexander Administration it finished under the Bernardi Administration. We built it in something like six months; it was supposed to take a year and a half. Critics were saying no, we said we want it, we all worked together.  We built a skating Rink and a public plaza.”

“I believe we’ve moved the dial on housing. We’ve got the bill passed creating the bureau of adjudication thanks to Assemblyman Magnarelli and Senator John DeFrancisco.  Housing Court had to get legislation dealing with housing. We can take those minor code violations, trash, broken tv’s , junk cars. And we can ticket people and they can come into a bureau similar to the Parking ticket bureau. “This means we take the pressure off the law department, freeing them up to take care of the more serious violations.”

According to Nicoletti, “Neighborhoods have to be strong, safe and clean.”

“I want people to remember me as a person that made their life better. And when I’m done I want to sit on my front porch and play with my grandchildren.”

I am running as Your Neighborhood Mayor to restore high quality city services, fix roads and put cops back in our neighborhoods.  I will also declare Syracuse Open for Business by creating an atmosphere where businesses and construction are welcomed and where jobs are offered to city residents through Community Benefit Agreements.

Federal and State funds must be combined with local tax dollars to make a significant and noticeable dent in our water, sewer and street infrastructure which have been neglected for close to 30 years. That is when the Federal government and New York State ended revenue sharing with local governments. In the past if the City put up $100,000 for an infrastructure project the Federal government gave $100,000 and the State gave $100,000.

This once great housing program has been so dramatically cut that its impact has been reduced significantly. In order to have some impact, it will be necessary to concentrate our efforts in smaller areas each year, then moving from neighborhood to neighborhood in order to see results. Once we can demonstrate success I believe we will be able to secure more Federal Funds.

Under the current PILOT program a baseline exists, the current property tax, the developer is given 10-15 years to have the new property tax based on the improvement to be charged. The City needs to rethink how much should be offered to projects and the city must secure the public benefit of local jobs when a tax incentive is given.

FYI-Rochester has an “embellishment fee” based on your property frontage. (They begin plowing sidewalks at 4 inches) Average “Homestead charge” $35.13 annually. http://www.cityofrochester.gov/sidewalkplowing/

Syracuse could follow the Rochester model, the State of New York requires that 2/3 of the property owners must petition the city for their street to be included in the special assessment district. The City would then determine the cost and pass it on to each property owner based on front footage, in the same manner we currently do with street sweeping.

Job retraining is essential to lift the unemployed and under employed out of poverty. Many jobs are not being filled with city residents because they lack the basic tools to perform them. In the 21 Century, education must be life long, job skill sets have changed rapidly in this postindustrial economy. The City must train its non-college bound students and its displaced workers in technical based programs in our City Schools.

We need more grass root development, like Price Rite provided when neighborhood activists took matters into their own hands to get affordable high quality food for its residents. See a problem, solve a problem. The City must assist whenever possible to foster home grown development.

The City Minority Business Office must be expanded and empowered to help local entrepreneurs to get their business ideas from being a dream to a reality. Giving guidance and access to the various Federal and State programs designed to provide seed money is a first big step. Then the city must develop mentorship programs with successful minority business owners to ensure success. Only the city and the community together…can make this happen.