Born and raised in San Diego, California Juanita Perez Williams is a Mexican-American whose grandparents migrated from Guanajuato, Mexico. As a child Juanita participated in one of the first Head Start Programs and attended college with the assistance of the Educational Opportunity Program. In 1986 she received her undergraduate degree and went on to obtain her law degree. She entered the military serving 5 years attaining the rank of Lieutenant Commander.

In 2008 Ms. Williams was appointed by then Attorney General, Andrew Cuomo to serve as an Assistant Attorney General, investigating labor violations and Fraud. In 2010 Juanita was selected to lead the city’s legal office as Corporation Counsel.  In her position with the City of Syracuse, Ms. Williams negotiated high profile legal issues including the HUD project that involved the purchase of nine multi-family buildings and the 10-year sales tax agreement with Onondaga County.

Why Are You Running for Mayor? 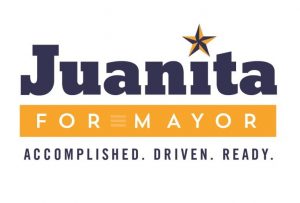 “I’m running for Mayor because I see the potential of this city every day, going back and forth from my neighborhood to downtown and back. That People are looking for opportunity. They are looking for someone who will be there for them that will support them. I’m running for mayor to make sure that the people of this city, which has the ability to take us to a place of the top 25, have that opportunity, and have that voice. And I’m going to be one who doesn’t lead from the top, but serves from the bottom, to make sure those voices are being heard.”

Regarding the electoral contest, Ms. Williams pulls no punches about what challenges face the next Mayor, “You have to be someone who has demonstrated leadership. We’re at a critical moment in the history of our city and some of the people lined up to do this have no understanding how difficult this job is going to be. Not that being mayor is easy, but now more than ever this is going to be difficult.”

Ms. Williams then zeroed in on some of the critical issues that will greet the new mayor on the first day in office. “This is a critical point for our next leader whether it’s defending it (Syracuse), and maintaining its status in the region and not being swallowed up by a county.  Whether, it’s focusing on high concentrations of poverty that continues to grow.  Whether, it’s focusing on the fact that we continue to have more and more people who lack the skills to get into the workforce, and that jobs being offered are not in any way tailored to meet the needs of people with these skills.

Williams raises her voice and states with certitude, “We’re asking them to take up the burden of a dilapidated city on the outskirts of downtown that continues to become more and more violent, and more filled with crime. My point is that, if we don’t have someone who can step up to the plate, who has demonstrated already, ‘these are the things that I’ve done, this is how I lead, this is how I come up with solutions.’ We’re going to continue to go into this spiral of depending on government to take care of us, hoping for a trickle-down effect. Or at the very least, praying we can maintain the status quo in the downtown areas. “

I want to be Mayor because our city deserves better – better than the same tired sound bites offered by career politicians who promise a lot, but never deliver. I grew up in poverty and was a beneficiary of Head Start and free school lunches. But I did not let my circumstances define me, just like I won’t let them define this city. Those experiences give me a unique perspective on how to lead this city out of its current malaise.

I grew up idolizing my dad and his efforts to peacefully fight for fair pay and dignity for migrant farm workers in California where I was raised.  My mom too also instilled in me that women can achieve anything they set their minds to if provided the opportunity.  Both of their examples inspire me daily in the work that I do for this community.

In terms of political influences, I’ve always admired the late Governor of Texas, Ann Richards for her plain spoken, no-nonsense approach to solving problems in a male-dominated political arena.  I have been similarly influenced by California Governor Gerry Brown who, throughout his career, has fought hard to make government work for everybody regardless of the political clout they posses.  Finally, I’ve always admired the late Tipp O’Neil who managed to find the humanity in his political opponents that kept a sense of civility in our politics that sadly is in short supply today.

We fix our infrastructure in two ways.  First we need to leverage resources from the I-81 project that will be a game changer for our city that will end up literally creating a new urban core.

Secondly, and more concretely, I propose allocating a portion of the fees generated by the Syracuse Industrial Development Agency (SIDA) to put towards the maintenance of our infrastructure.  After all, the beneficiaries of SIDA assistance still need roads, bridges and sewer lines to make their businesses successful.   A dedicated infrastructure fund source is one way to ensure community-wide benefits to compliment the tax exemptions granted by SIDA annually.

I generally agree with the way Mayor Miner’s administration apportions its CDBG funds The lion share of these meager federal allocations go to help low-income homeowners make vital repairs to their homes through a number of loan and grant programs administered by Home HeadQuarters (HHQ), a nationally renowned community development financial institution (CDFI).

I do feel more needs to be done to provide affordable financing to owners of small multi-family buildings (1-6 units) to help responsible investor-owners maintain their rental housing that provide haven for more than 60 percent of city residents.

The base level of taxation generating revenue for the city is through property and sales taxes, set equally across all property owners and merchants.  If the question is referring to the additional benefits handed out by SIDA that include payments in lieu of property taxes (PILOTSs), sales tax and mortgage tax exemptions, all of which are subjectively based upon the amount of investment a developer proposes to make in our city, my stance is this.

The ideal situation would be an even playing field for all businesses, existing and proposed.  But the fact is that IDA’s are the law of the land in New York State and every municipality is entitled to one.  Syracuse would place itself in an economically disadvantaged position if it unilaterally ceased to provide SIDA exemptions.  That is why, at a minimum, the city and county need to work toward combining their IDA’s (SIDA and OCIDA) so that they are not competing with each other in awarding benefits to prospective developers.  We need to look to the model offered by Rochester and Monroe County as one of many examples of IDA’s working together to ensure tax exemptions are used judiciously to stimulate non-functioning sectors of our local economy.

FYI-Rochester has an “embellishment fee” based on your property frontage. (They begin plowing sidewalks at 4 inches) Average “Homestead charge” $35.13 annually. http://www.cityofrochester.gov/sidewalkplowing/

Syracuse city residents are already taxed too much and adding an additional $35.13 to their bill is unacceptable. Many people currently are choosing between medicine and groceries. My administration will focus on sidewalk snow removal in two ways. 1. Immediately provide assistance to individuals who are physically unable to clear snow. We must assist and protect the most vulnerable in our city. 2. Inquire about a fleet of four wheelers and hire community residents to clear snow on our sidewalks.

To grow high paying jobs in our neighborhoods we need to understand that the ReZone process represents a ‘once in a generation’ opportunity to recognize the city’s industrial past by zoning those areas “light industrial” to allow existing manufacturers like Byrne Dairy and Steri-Pharma to grow and add jobs.  A light manufacturing zone district will also allow complementary small manufacturers to relocate close to our neighborhoods and form a nexus of suppliers and value enhancers.

Many city residents are fully capable of filling the many unfilled higher-paying suburban jobs but are stymied primarily by transportation.  The newly released Reverse Commute study by SMTC identifies the hurdles faced by city residents and presents a series of recommendations to overcome these barriers.  I intend to work with all of our community partners to bridge the transportation gap.

Price Rite does appear to be a success and I applaud Jubilee Homes Director Walt Dixie for his tenacious decade-long pursuit to both attract a highly-rated national grocery chain and a substantial amount of public investment from the state, county and city to make his dream of a grocery store in the Southwest neighborhood a reality.

Government intervention in the private sector to stimulate failures of the market to meet critical community needs is a noble undertaking but one that must be done with extreme care.  As a rule, government should not try to pick winners and losers in the private sector (i.e., Pioneer Freezer, Northern Airlines, Spectrum Shoes).

My administration will seek to provide needed support for existing small businesses to help them grow and thrive in our community with less focus on bringing in national chains to compete with our local homegrown businesses.

Again, my focus will be on improving upon the businesses that currently exist in our city, and that means beyond Downtown.  One of the few things I support about the ReZone recommendations to date is the introduction of a series of mixed-used zoning districts.  These districts should be linear along all of the city’s traditional commercial corridors.  The blocks on either side should be allowed to be more densely developed to support the businesses along these corridors.  And my administration will work with residents on developing a series of market studies to both determine the commercial needs of the residents in the surrounding neighborhoods and to attract business development along these corridors.