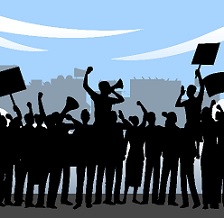 The Syracuse Police Accountability and Reform Coalition (SPAARC), is a grassroots group of currently 14 organizations across the city, including ACTS, that has put forth a list of demands to address decades of abuse by the Syracuse City Police Department. You can read them here.

On Thursday July 2nd, the group called a meeting with the Mayor, Deputy Mayor, Common Council President Chief of Police, and Superintendent of the Syracuse City School District. The over 3-hour meeting highlighting the police reform demands and the moving community testimony was live streamed on the city’s website, has been viewed over 6 million times, shared by “Now This”, Shaun King and Ava DuVernay. You can view the video here.

At our insistence, the Mayor has said he will respond to the demands and the issues raised at the meeting in 2 weeks from the live stream video you see above. A rally “People’s Agenda for Policing” is set for,  Thursday, July 16th at 5:15 PM on the steps of City Hall, the day we were promised a response. SPAARC plans to use escalation over time as needed, to ensure justice for the city residents of Syracuse.

Please come out on tomorrow to support our efforts for police reform!  Be sure to wear a mask and maintain a safe, social distance at the rally.

No Justice, No Peace.