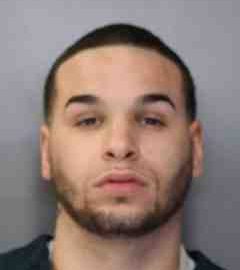 Syracuse, NY.  On Tuesday, January 15, 2019, at approximately 7:02pm, Syracuse Police Officers Joel Dorchester and Leonard Brown conducted a vehicle and traffic stop of a gray Chevrolet Impala, in the 200 block of Park Street.  While speaking with the occupants of the vehicle, officers smelled the odor of burnt marihuana emanating from the vehicle.  The passenger of the vehicle, Steven McCauliffe, 20, of Syracuse, told officers he had a bag of marihuana.  Officers recovered 15 grams of marihuana from McCauliffe and he was released on an appearance ticket for Unlawful Possession of Marihuana.

Upon further investigation, the driver of the vehicle, Dominick Vidal, 24, of Syracuse was found to be in possession of 45 grams of Fentanyl and various drug paraphernalia.  Vidal was arrested and charged with two counts of Criminal Possession of a Controlled Substance in the Third Degree, Criminal Possession of a Controlled Substance in the Seventh Degree, Criminal Use of Drug Paraphernalia in the Second Degree, Operating with a Suspended Registration and other vehicle and traffic law infractions.  Vidal was lodged at the Onondaga County Justice Center pending his arraignment.