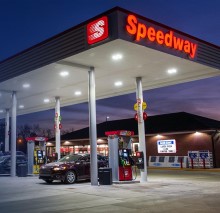 On Wednesday, January 22nd, 2020, at approximately 1:20 a.m., Officers responded to 400 South State Street, Speedway gas station, for a reported armed robbery. Officer Scott Lewis was driving to the scene when he observed two males matching the suspect description that was provided by the store clerk. Officer Lewis attempted to stop the males, but they ignored his commands and then fled on foot. After a foot pursuit, 20-year-old Kenaz Ramsey, of Syracuse, and a 17-year-old juvenile were taken into custody. Ramsey was found to be in possession of a loaded .380 handgun.