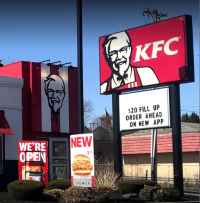 On September 3, 2021 at about 10:55 P.M. Syracuse Police Officers responded to the KFC, located at 1524 S. Salina St. for a call of a stabbing. Their investigation revealed that there was a physical altercation between two employees, in which Dwayne Lennon struck a 25-year-old male employee in the face with a pair of scissors, causing a laceration. Lennon, 37 years of age, of Syracuse, was arrested and charged with Assault in the 2nd degree and Criminal Possession of a Weapon 4th degree, and was lodged in the Onondaga County Justice Center. The victim was transported to Upstate University Hospital by AMR Ambulance, where his injury is considered to be non-life threatening.