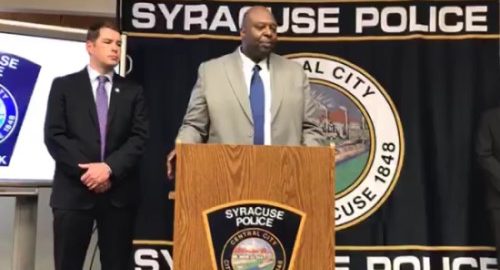 Officers disciplined for violation of demeanor policy; review determines Officers’ actions to bring suspect into custody were necessary and consistent with policies and training

Syracuse, N.Y. – The Syracuse Police Department reported the outcome of its investigation into a May 31 arrest on Grace Street. In a press conference, Police Chief Kenton Buckner announced that two Officers have been disciplined for violations of the Department’s demeanor policy. The investigation also determined that the Officers’ actions to bring the suspect into custody were necessary and consistent the Department’s policies and training. See link to Syracuse Police Department Press Conference Live Video.

On May 31st, 2019 at 8:22 P.M., Officers conducted a traffic stop of a 2010 Cadillac in the 100 block of Grace Street.  The vehicle was playing music which could be heard in excess of 50 feet, which violates City of Syracuse Noise Control Ordinance, Section 40-16 (b), sound reproduction. Upon engaging the driver, Shaolin Moore, 23, of Syracuse, Officers requested that Moore exit the vehicle to conduct a search of his person incident to his lawful arrest for excessively loud music. Moore refused Officers’ requests to exit the vehicle. Officers then had to physically remove Moore from the vehicle and, when Moore resisted arrest, use force to place him into custody.  Moore was subsequently arrested and charged with local law sound reproduction and resisting arrest.

Following the arrest, the Department’s internal affairs function, which is housed in the Office of Professional Standards, and Department leadership conducted a comprehensive review of the arrest.

The review included interviews with Mr. Moore and Officers, as well as extensive review of video of the arrest from body worn and personal cameras.

The review concluded that two of the Officers involved in the arrest, Officer Christopher Buske and Officer Leonard Brown, violated the Department’s policy on demeanor in a traffic stop. Additionally, when the suspect failed to comply with the Officers’ lawful requests to leave his vehicle and resisted arrest, the investigation determined that the Officers’ actions were necessary to bring the suspect into custody and were consistent with the Department’s policies and training.

“The use of force in this particular incident is difficult to watch and hard to understand. It has raised many legitimate questions from our community and even our leaders,” said Chief Buckner. “This incident has created an opportunity for a frank discussion about the use of force. Why is it used? When is it OK to use? How much force is appropriate before it infringes on our community’s sacred civil rights?”

Chief Buckner and Mayor Walsh confirmed that the Department expects to hold a public forum on use of force on Friday, June 28. The time and location of the forum will be announced shortly.

“I urge all members of our community to participate in this dialogue,” said Mayor Walsh.  “The forum will be the first of many conversations and I am confident they will lead to greater understanding. To all in our community, I pledge this: we can do better. And if we all work together, we will.”