Syracuse, N.Y. – On Thursday September 20th, 2018 at approximately 9:02 PM, Syracuse Police Officers responded to the 1300 block of Midland Avenue in regards to a shots fired call.  There were also several calls to the 911 center reporting that more than one person was possibly injured.  Upon arrival, Officers observed a large crowd of people and located several injured persons suffering from apparent gunshot wounds.  Officers at the scene requested additional ambulances and Officers respond to the scene.

There were 5 injured persons located at the scene and all were transported to Upstate University Hospital by AMR Ambulances for treatment.  At this time, the victims are listed in a stable condition.  The victim’s ages range from 8 years old to 35 years old. 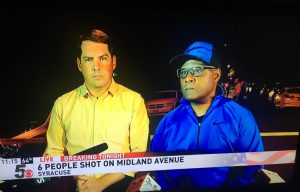 The New York State Troopers are reportedly on the scene to assist the Syracuse Police Department in their investigation.

Syracuse Mayor Ben Walsh and Police Chief Frank Fowler addressed the city in a message that focused on concern for the victims. Mayor Walsh assured Fowler that the Syracuse Police Department will have any resources needed at their disposal.

While law enforcement was busy on Midland Ave. another shooting has been reported, at approximately 9:53 pm, Syracuse Police responded to the 300 block of Furman Street in regards to a shooting call.  Upon arrival, Officers located a female in her teens, suffering from a gunshot wound to her lower back / buttocks area.  The victim was transported to Upstate University Hospital for treatment.  The victim’s injury does not appear to be life threatening.

This investigation, as with the Midland Avenue shooting is continuing, and additional information will be released when it becomes available.

Anyone with information is asked to contact the Syracuse Police Department Criminal Investigations Division at (315) 442-5222.  All calls will remain confidential.  Anonymous tips may also be submitted using the “SPD Tips” app. or through their website at syracusepolice.org