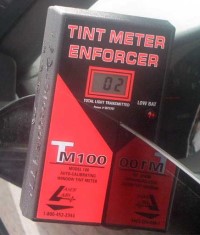 On Wednesday, February 19th, 2020, at approximately 12:44 a.m., Officers Jacob Tracy and Michael Dixon conducted a vehicle and traffic stop in the 2300 block of Midland Avenue.  The vehicle, a 2002 Toyota Camry, was being operated with illegal window tint.