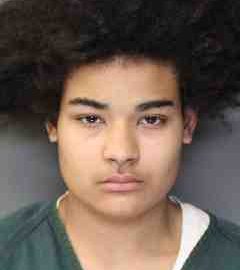 Syracuse, NY.  On Friday, January 18, 2019, at approximately 3:14pm, Syracuse Police Officers were dispatched to the 300 block of Catawba Street regarding a stabbing investigation.  Upon arrival, officers found a 23 year old male suffering from a stab wound to his back.

The victim told police he had been involved in an altercation with his girlfriend, when their roommate, Carleana Weldon, 22, of Syracuse, became angry with him.  The victim said Weldon picked up a knife and stab him in the back.  The victim sustained a four inch laceration to the right side of his back.  He was transported by AMR Ambulance to University Hospital for medical treatment.  His injuries are not considered life threatening.

Weldon was still on scene when police arrived.  Officer Gene Lagoe located Weldon inside her residence and was able to take her into custody without incident.  Officer Lagoe also recovered the knife used in the incident.

Weldon was arrested and charged with Assault in the Second Degree and Criminal Possession of a Weapon in the Fourth Degree.  She was lodged at the Onondaga County Justice Center pending her arraignment.