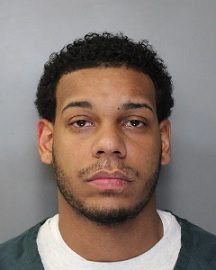 Syracuse, New York. Syracuse Police responded to a report of a vehicle striking a utility pole at the intersection of Liberty St and W. Belden Ave on November 22, 2018 at 1:43 am. The residence at 417 Liberty St and the involved vehicle were destroyed in a fire resulting from contact with the broken utility pole. A resident of that address suffered minor injury escaping the residence. The driver of the involved vehicle reportedly exited said vehicle and walked away southbound on Liberty St.

Officers from the Traffic Section commenced an investigation. During the course of that investigation, the driver was identified as Xavier Jackson, 24, of Syracuse. Jackson has been located and arrested, charged with Reckless Endangerment 1st degree, Reckless Driving, Leaving the Scene of a Crash, Aggravated Unlicensed Operation 2nd degree, Failure to Use an Interlock Device, and several V+T infractions. He was lodged in the Justice Center upon arrest.

The registered owner of the involved vehicle was cooperative with the investigation. Despite initial reports, the vehicle was not stolen at the time of the crash. The incident remains under investigation and further charges may be forthcoming.

No Further Information is Available at this time.