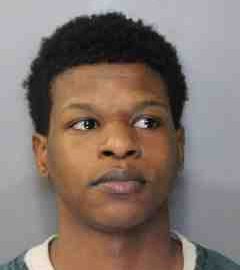 Syracuse, NY.  On Saturday, January 5, 2019, at approximately 6:48pm, Syracuse Police Officers responded to the 100 block of Redfield Place, regarding a burglary in progress.  The victim told 911 that he has cameras inside his residence, which he was viewing from a remote location.  The victim said he could see a male suspect inside his home.

Upon arrival, officers located an unsecured side window.  The officers set up a perimeter around the building and called for K9 assistance.  The building was searched by K9 Jarno for possible suspects.  K9 Jarno apprehended Darius Williams, 18, of Syracuse, in a bedroom.  Officers then located a second suspect, Savon Swain, 18, of Syracuse, hiding in a bedroom closet.

Williams and Swain were arrested and charged with Burglary in the Second Degree.  Swain was also charged with Unlawful Possession of Marijuana.  They were lodged at the Onondaga County Justice Center pending their arraignments. (There’s no booking photo for Swain  available at this time.)