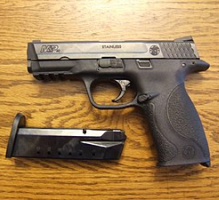 On Friday, September 18th, 2020, at around 9:52 A.M., Officers responded to the 1600 block of Bellevue Ave. for a menacing complaint. The investigation revealed that a 25-year-old male suspect pointed a handgun at a female during a dispute. The suspect then fled the scene in a vehicle before police arrived. A short time later, Officers Joseph Taylor and Patricia Sargeant noticed the suspect driving in the area.

Officers tried stopping the car, but the suspect refused. A brief pursuit ensued. During the chase, the suspect threw a firearm out the window. The suspect eventually stopped a short time later and was taken into custody.   A search of the area where the suspect threw the gun initially was negative. It was later determined that another male, 25, retrieved the discarded weapon and hid it.

The gun was eventually located near where the suspect threw it and was discovered to be a loaded, .40 caliber Smith and Wesson handgun.