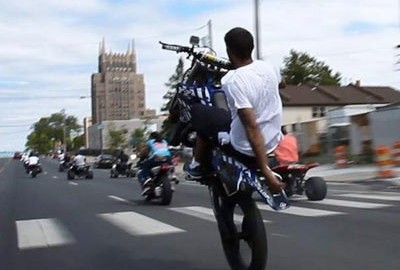 Police may impound and permanently seize these vehicles

Syracuse Police will be showing Zero Tolerance for drivers of any Mini Bikes, 4 Wheelers and All Terrain type vehicles driven in the City of Syracuse. These vehicles cannot be registered in the State of New York for use on any sidewalks, streets or highways. Police have been receiving steady complaints at various neighborhoods in the city for reckless, speeding and noisy use of these vehicles.

Along with these complaints, police investigated several crashes to include one involving a mother and daughter who were riding an ATV down the middle of the road on N. Beech St.  She lost control and they both fell off the ATV.  The ATV continued on striking a vehicle. Both mother and daughter were transported to the hospital with minor injuries.

Anyone that has any information of any mini bikes, 4 wheelers and ATV type vehicles that are driving within the City of Syracuse are asked to call police at 448-8650 or the 411 TIP Line. All information will remain confidential.

If this is occurring in progress you are asked to call Syracuse Police at 911.

The Syracuse Police Department may impound and permanently seize these vehicles pending the outcome of the investigation. The drivers, owners and parents will be held accountable and may be ticketed and arrested