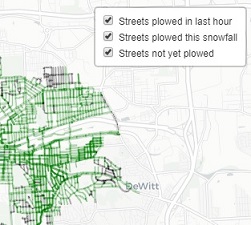 Use the interactive map to find out when and or if, your street was plowed

(Update) The system provides hourly updates to the GPS tracking of plows, you may notice an hour delay between plowing and being visual on the snow plowing tracking system.

When interviewing Syracuse Mayor Ben Walsh, it became clear that steps were being taken to measure how the city is performing its basic functions.  Snow removal has been a hot topic in a snowy city, finally producing a community-wide consensus to put together a snow removal plan for several sidewalk routes. However, due to lack of interest in the proposal the city had to re- think how to deploy this newly approved plan.  Therefore, it may be next winter season when we see a plan in place. 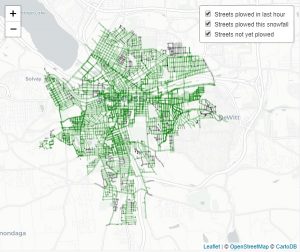 In the meantime, the city has introduced a snow plow mapping portal on the city’s website. This tool allows the user to track where snow plows have been, along with a time of action on any particular street. So, before calling and saying, “hey, my street hasn’t been plowed!” check the interactive map, and you may find that the area in question may have been plowed several hours ago.  Click on the following link  City of Syracuse Snow Plow Tracking Interactive Map track snow plow activity in your neighborhood.

This new system provides a method of tracking snow plow deployment during a snow event. Once statistics are gathered on how effective or ineffective a response has been, changes can be made to plowing routes.  Information such as; Air temperature, how fast is the snow falling per hour along with event duration will give the Department of Public Works the data necessary to develop responsive and effective snow removal.