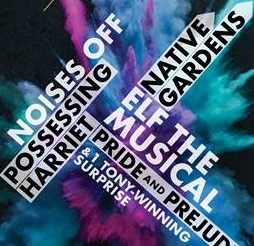 Syracuse Stage will produce the critically acclaimed winner of the 2016 Tony Award for Best Play, “The Humans”

“It is a season bursting with dynamic stories and vibrant characters,” said artistic director Robert Hupp, who noted the balance in the season between shows that are welcoming to a broad audience and shows that are not as well-known but are equally engaging. “We want everyone to come to Syracuse Stage, which means producing theater that speaks to people in a variety of ways.” 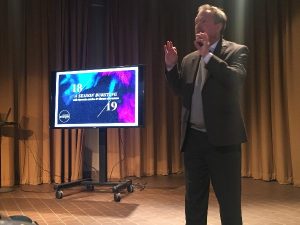 Artists new to Syracuse Stage in the season include playwright Kate Hamill and director Jason O’Connell. Hamill has been a red-hot writer in New York of late with her adaptations of “Vanity Fair” and “Sense and Sensibility.”  Her latest adaptation, Jane Austen’s “Pride and Prejudice” opens at Syracuse Stage in the spring.  O’Connell, who appeared in the Primary Stage’s New York City production at the Cherry Lane Theatre of “Pride and Prejudice,” will direct Syracuse Stage’s production. Also new to Stage is Melissa Crespo, who will direct “Native Gardens.” Crespo is a New York-based director of theater, opera and film, best known for the acclaimed opera “¡Figaro! (90210),” which premiered at LA Opera.

Returning artists include former Syracuse Stage artistic director Tazewell Thompson, who will direct the world premiere play “Possessing Harriet” by Stage associate artistic director Kyle Bass. Thompson served as Stage’s artistic director from 1992 to 1995. Since then he has enjoyed a successful career in theatre and opera, and has worked frequently at the Glimmerglass Festival. In 2006, he was nominated for an Emmy Award for his direction of a televised production of “Porgy and Bess.” Donna Drake, who scored a triumph in the 17/18 season with the “Wizard of Oz,” returns for the holidays as the director of “Elf the Musical”.

The 2018/2019 season opens with what has been called “the funniest farce ever written,” Michael Frayn’s “Noises Off.” Premiered in 1982, Frayn’s famous comedy follows the door-slamming, prat-falling, comedic mishaps of a company of actors attempting to perform a comedy. As the action shifts from on stage to back stage, the mayhem multiplies and the laughter grows exponentially. Wildly popular with theaters large and small, professional and amateur, “Noises Off” has never been produced at Syracuse Stage.

“You may have seen ‘Noises Off,’” said Hupp, who is slated to direct. “But you haven’t seen Syracuse Stage’s ‘Noises Off.’”

October brings the world premiere of “Possessing Harriet,” a drama that has its inspiration in a chapter of Central New York history. Originally commissioned by the Onondaga Historical Association and written by award-winning playwright and Syracuse Stage associate artistic director Kyle Bass, “Possessing Harriet” imagines a conversation between an enslaved woman named Harriet Powell and a young Elizabeth Cady, the fierce advocate for women’s rights.  The conversation takes place in an attic room in the Peterboro home of abolitionist Gerrit Smith as Harriet, having slipped away from a Syracuse hotel and the family who owns her, awaits her departure north on the Underground Railroad. This absorbing drama unfolds in real time, as danger nears and Harriet must make a life-altering decision.

“I am humbled and honored that Bob has chosen this play to be produced at Syracuse Stage,” said Bass who has previously been represented at the theater with “Cry for Peace: Voices from the Congo,” co-written with Ping Chong, and “Separated,” based on the experiences of Syracuse University students in and out of military service.

The holiday season rings in cheer with “Elf the Musical.” Based on the New Line Cinema film starring Will Ferrell, “Elf the Musical” follows an oversized elf named Buddy on his search for his real family in New York City. Filled with humor and terrific songs, this heartwarming musical will be co-produced with the Syracuse University Department of Drama.

The New Year brings Karen Zacarías’ new play “Native Gardens” to Syracuse Stage. A winner of the National Latino Playwriting Award, Zacarías tackles such hot-button topics as privilege, prejudice and even border disputes and walls with a good natured and light-hearted touch.  Set in adjoining backyards in the Georgetown section of Washington, DC, “Native Gardens” pits an older established white couple against a new-to-the-neighborhood young Latino couple in an escalating  fracas over two feet of property. Cordial welcome soon gives way to rivalry in a comedy/drama that has been called a play “we need right now.” “Native Gardens” is the first of two co-productions with Rochester’s Geva Theatre Center.

“‘Native Gardens’ director Melissa Crespo, who is a new director for Syracuse Stage, has a keen connection to the playwright’s voice. I look forward to sharing her insight into the play with our audience,” added Hupp.

With Hamill’s adaptation, Jane Austen makes her Syracuse Stage debut. “Pride and Prejudice” is the familiar and beloved story of independent-minded Elizabeth Bennet and the handsome Mr. Darcy. Love and marriage, family and social status get a good workout in this energetic production.

“This is Jane Austen for the 21st century,” Hupp explained. “It’s fast and funny and it is altogether true to the heart of the novel. Kate Hamill’s brilliance is that she can capture everything that’s great about the novel in a way that is very theatrical and very alive.”

The season concludes with the Broadway smash “The Humans” by Stephen Karam, a contemporary comedy/drama that won the 2016 Tony Award for Best Play. Centered around a family Thanksgiving gathering, “The Humans” also won the Drama Critics Circle, the Outer Circle Critics, the Drama League and the Drama Desk Awards for Best Play.  It was named Best Play of the Year by the following media outlets: Newsday, The New York Times, New York Magazine, The Record, The Hollywood Reporter, The Chicago Tribune, Deadline and npr. “The Humans” is the second of the season’s co-productions with Geva and will be directed by Geva’s artistic director Mark Cuddy.

Hupp noted that, as with this season’s “The Curious Incident of the Dog in the Night-Time,” “The Humans” will only be produced at select regional theaters next season, including at Syracuse Stage.

“I’m excited and thrilled to announce a playwright of such accomplishment and national profile as the playwright-in-residence for Cold Read: Festival of Hot New Plays 2019,” said Bass.

FastHorse is an enrolled member of the Rosebud Sioux Tribe, Sicangu Lakota Nation and her new comedy, “The Thanksgiving Play,” will be produced at Artists Repertory Theatre next season. Her work places an emphasis on cross-cultural community-engaged work between Indigenous nations. Other produced works include “What Would Crazy Horse Do,” “Urban Rez,” “Landless,” “Average Family” and “Cherokee Family Reunion.”

Hupp noted the momentum Syracuse Stage has built with a string of critical and popular successes beginning with “The Three Musketeers” and carrying through the recently closed “Next to Normal.”  He said the new season should continue to engage and entertain audiences with its promise of “passion, power and purpose.” 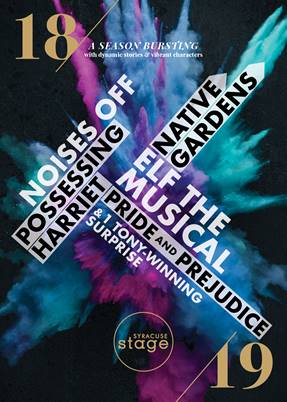 Hailed as the “funniest farce ever written” and a “festival of delirium,” “Noises Off” is legendary in the annals of laughter. As a company of actors attempts to deliver a comedy on stage, playwright Frayn takes the audience behind the scenes where the real farce explodes. Slamming doors, wayward fish and comic chaos delivered with impeccable precision make “Noises Off” the most dexterously realized comedy ever about putting on a comedy.

Peterboro, New York, 1839. An enslaved young woman named Harriet, who has slipped away from a Syracuse hotel and the Southern family who owns her, finds temporary safety in an attic room in the home of abolitionist Gerrit Smith. Frightened and confused, she awaits her departure on the dangerous journey to Canada on the Underground Railroad, and spends an absorbing hour with the young Elizabeth Cady, fiery advocate for women’s equality. In a place where ideals meet experience and the aspirational collides with the personal, there lies the hope of awakening. A world premiere by award-winning playwright and Syracuse Stage associate artistic director Kyle Bass.

This holiday season channel your inner elf and join Buddy on his journey from the North Pole to New York City to find his real family. For this journey, you will need provisions (four food groups recommended: candy, candy canes, candy corns and syrup), snowballs and an ability to sing very loud (but maybe wait for the ride home). Most of all, you’ll need family and friends and a desire to spread holiday cheer. Donna Drake (“The Wizard of Oz”) returns to direct this delightful holiday show.

Enjoy a light-hearted look at what ails us in this witty and spot-on new comedy. Take a semi-retired Washington bureaucrat and his defense contractor wife, a young Chilean lawyer and his doctoral student wife, set them cheek by jowl in a border dispute over a couple of feet of property in a Georgetown backyard, and let the laugher begin. Privilege, prejudice and, yes, a border dispute all get an equitable skewering in this punchy and playful show. The road to recovering our shared sense of decency might just begin with laughter. A winner of the National Latino Playwriting Award, Karen Zacarías is among the most produced playwrights in the nation. This satirical gem shows us why.

Based on the book by Jane Austen
By Kate Hamill

In the age of “The Crown” and “Victoria,” we go back to the Anglophile source with Kate Hamill’s playful adaptation of Jane Austen’s classic romance, “Pride and Prejudice.” The outspoken Elizabeth Bennet faces mounting pressure from her status-conscious mother to secure a suitable marriage. But is marriage suitable for a woman of Elizabeth’s intelligence and independence? Especially when the irritating, aloof, self-involved… tall, vaguely handsome, mildly amusing and impossibly aristocratic Mr. Darcy keeps popping up at every turn? What? Why are you looking at us like that? Literature’s greatest tale of latent love has never felt so theatrical, or so full of life, than it does in this effervescent new adaptation. Hey, Jane Austen could show these upstart hipsters a thing or two.

Critically acclaimed winner of the 2016 Tony Award for Best Play, “The Humans” offers a compelling look at a slice of contemporary life as seen through a family Thanksgiving celebration. The Blakes of Scranton, Pennsylvania, Eric and Deirdre, have come to Chinatown to spend the holiday with their adult daughters, Aimee and Brigid. Along for the celebration are Momo, Eric’s mother teetering in and out of consciousness, and Richard, Brigid’s boyfriend. Of course, they eat turkey, but when they talk turkey, it really gets interesting. A blisteringly funny and poignant play about people we might know and people we could be.