SYRACUSE, NY – Syracuse Stage and the Department of Drama team up with New York City-based 2 Ring Circus to put an acrobatic spin on the beloved family favorite, “The Wizard of Oz.” Based on the original novel by L. Frank Baum and the 1939 MGM Motion Picture, this stage adaptation contains the familiar characters and popular songs , such as “Over the Rainbow” and “We’re Off to See the Wizard (Follow the Yellow Brick Road).” The production opens Dec. 1 in the Archbold Theatre at the Syracuse Stage/SU Drama Complex, 820 E. Genesee St. Preview performances are Nov. 29 and Nov. 30.

As in previous seasons, the curtain time for weeknight performances has moved to 7 p.m. to accommodate families and younger audience members.

Syracuse Stage will also host a special sensory friendly performance on Saturday, Dec. 30, at 3 p.m. that is welcoming to individuals who are on the autism spectrum or with sensory sensitivities and their families. Special accommodations will include lowered sound levels, reduced stage lighting and increased lighting in the theatre to allow for easier movement. For this performance only, all tickets are $25 and include a 100 percent refund right up to the start of the show if needed.

The Syracuse Stage production of “The Wizard of Oz” features the original music and lyrics from Harold Arlen and E.Y. Harbug and background music by Herbert Stothart. Dorothy’s journey down a yellow brick road will be choreographed by 2 Ring Circus using a cirque-like style called storytelling circus. The role of circus in this production isn’t to distract, but as with more traditional choreography, it will be incorporated directly into the narrative.

2 Ring Circus founding members Ben Franklin and Joshua Dean already have a strong friendship with director Donna Drake, whose credits include the original company of “A Chorus Line” on Broadway. Franklin and Dean met Drake at the Seaside Music Theater in Daytona Beach, Florida, about 15 years ago.

“My friendship with the wonderful Ben Franklin began when he was very young,” said Drake. “He had just gotten out of college and was an intern at Seaside where I was directing and choreographing. From there, Ben and I worked on many, many shows together. It was during the production of ‘Aida’ at Seaside that I met Josh and hired him for his aerial abilities.”

Years later, Drake, Franklin and Dean put together a circus version of “Godspell” at the Arkansas Repertory Theater. Then artistic director Bob Hupp hired 2 Ring to work on “Godspell” before transitioning to Syracuse Stage.

“When ‘Godspell’ ran down there (Arkansas) it was overwhelmingly successful,” said Drake. “We rewrote it and turned it into a show taking place in a circus tent. When Bob left for Syracuse, he reached out and asked us if we could add circus elements to a Syracuse Stage production of ‘The Wizard of Oz.’ I jumped to the idea because circus is so innovative and sensational.”

A few circus highlights in the “The Wizard of Oz” involve Glinda as a trapeze artist, played by 2 Ring member and Department of Drama alumna Lani Corson, and Franklin spinning 28 hula-hoops at once while stilt walking.

“Specifically with ‘Oz,’ we’re looking at the type of circus and kind of style (Dorothy) would have seen had she gone to the world’s fair around the turn of the 19th to 20th century, “ said Corson. “We’re trying to be true to the time period and to the style of what she would have seen and then imagine from there.”

Drake explained there will be no changes to the original story from the 1939 film in this production, just slight alterations to add circus elements.

“I’m focusing a lot on Dorothy’s story and her journey,” said Drake. “Some of the features in this show will have a lot of aerial arts, but I’m not changing the story at all because ‘The Wizard of Oz’ is so iconic.”

A strong sense of collaboration among the design and production team has made Drake confident audiences will relish Syracuse Stage’s production.

“I rely heavily on my designers and the people associated with this production who are top of the line,” said Drake. “I would not be able to do this show if it weren’t for them.” 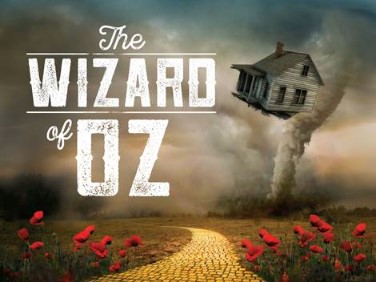 “The Wizard of Oz”

By L. Frank Baum
With Music and Lyrics by Harold Arlen and E.Y. Harburg
Background Music by Herbert Stothart
Dance and Vocal Arrangements by Peter Howard
Orchestration by Larry Wilcox
Adapted by John Kane for the Royal Shakespeare Company

Based Upon the Classic Motion Picture Owned by Turner Entertainment Co. and distributed in all media by Warner Bros.

Opening Night Party (free for ticket holders)
Join the cast for a post-show celebration with live music, food and drinks.

Prologue at 1 p.m. (free for ticket holders)
An intimate, pre-show discussion with “The Wizard of Oz” actors one hour prior to curtain. Bring your questions.

Pay-What-You-Will Performance @ 7 p.m.
There will be 76 tickets available for whatever price patrons wish to pay. Pay-what-you-will tickets must be claimed in person at the Box Office on the day of the performance, subject to availability. The Box Office opens at 10 a.m. and will remain open until the start of the show. There is a limit of two tickets per person.

Wednesday @ 1 Discussion (free for ticket holders)
In cooperation with the International L. Frank Baum & All Things Oz Historical Foundation and the All Things Oz Museum in Chittenango, New York, this special lecture at 1 p.m. in the Archbold Theatre features John Fricke, who is widely regarded as the world’s preeminent “Wizard of Oz” and Judy Garland historian and author. He is a two-time Emmy Award-winning producer/writer; a Grammy Award nominee; and the annual host/emcee of Oz and Garland festivals nationwide. Fricke has spoken about Oz and Garland everywhere from “The Today Show” (four appearances), to CNN, NPR, Sirius Radio, The Museum of Modern Art, The Film Society of Lincoln Center, the Academy of Motion Picture Arts and Sciences in Los Angeles and the Deauville Film Festival in France.

Prologue at 2 p.m. (free for ticket holders)
An intimate, pre-show discussion with “The Wizard of Oz” actors one hour prior to curtain. Bring your questions.

Brunch & Broadway Steps
At 11 a.m., take a dance class from a few of “The Wizard of Oz” cast members and learn some of the choreography from the show.

The dance class is free and recommended for all ages and abilities.

Pre-paid reservations for brunch must be made in advance through the Syracuse Stage Box Office.

Prologue at 6 p.m. (free for ticket holders)
An intimate, pre-show discussion with “The Wizard of Oz” actors one hour prior to curtain. Bring your questions.

Open Captioning at 8 p.m. Performance for patrons who are deaf or hard of hearing.

Audio Described Performance at 7 p.m. for patrons who are blind or visually impaired.

Sensory Friendly Performance at 3 p.m.
This performance will have special accommodations for those with family members on the autism spectrum or with any sensory sensitivities, including lower sound levels, reduced stage lighting and increased lighting in the theatre to allow for easier movement. All tickets are $25 and include a 100 percent refund right up to the start of the show if needed.