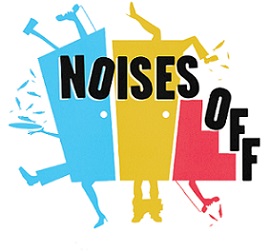 Set in three acts—the Syracuse Stage production is played with a fifteen-minute intermission between acts one and two and a five-minute pause between acts two and three—“Noises Off” follows the riotously calamitous attempts of a third-rate acting company to rehearse and perform a trifling sex farce called “Nothing On,” a clear parody of the West End megahit “No Sex Please, We’re British.”

Act one reveals the bumbling final rehearsal, a process continually derailed by a wayward plate of sardines.  Act two is a view from backstage, a virtuosic pantomime of precise pandemonium. The last act moves on stage for a performance where the show goes deliriously and deliciously wrong. 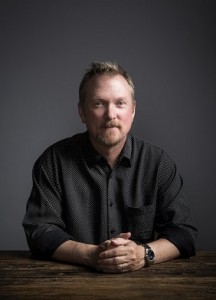 “Frayn’s genius is to take a classical farce and turn it on its ear,” said Syracuse Stage artistic director Robert Hupp, who directs “Noises Off,” and who confessed a deep affection for the play. “It’s so precise, and for a theater person, it’s a real joy, filled with inside jokes upon inside jokes.”

Frayn found inspiration for “Noises Off” in his own theatrical experiences. As a young actor, he got trapped on stage when a set door wouldn’t open no matter how hard he pulled. He found the solution when from offstage a voice counseled, “push.” As a young writer, he watched from backstage as two actors struggled to make multiple quick-changes while performing his one-act play “Chinamen.”  He found their struggles more entertaining that what he had written for them perform on stage. Theater, he concluded, is a perfect vehicle for farce because the need to succeed and to have the “show go on,” make the stakes very high for the characters.

When describing the demands farce places on the cast, Hupp cited the writer John Mortimer (“Rumpole of the Bailey”), who likened it to “tragedy played at a thousand revolutions per minute.” Farce is notoriously difficult to perform. Fortunately, Hupp has assembled a veteran cast, some of whom have appeared before at Syracuse Stage.

Dori Legg plays the aptly named Dotty Otly. Legg appeared in “Vanya and Sonia and Masha and Spike” and “Other Desert Cities.” Seth Andrew Bridges returns for his third consecutive season opener, having appeared in “Great Expectations” and “The Three Musketeers” as the swashbuckling Aramis. A professional stuntman on television and film, Bridges will put his physical skills to the test as Garry LeJeune. Andrew Ramcharan Guilarte plays the acerbic director Lloyd Dallas. Ramcharan last appeared at Stage in Disgraced.

Newcomers to Stage include Brad Bellamy, Eliza Huberth, Michael Keyloun, Gina Daniels, Blake Segal, and Kate Hamill, who figures prominently in the 18/19 season. In addition to playing the stage manager Poppy Norton-Taylor in “Noises Off,” Hamill will be represented in the season as the playwright of “Pride and Prejudice”  (March 20 – April 7, 2019). Hamill has enjoyed great success off-Broadway as a writer and performer with her adaptations of “Pride and Prejudice,” “Sense and Sensibility,” and “Vanity Fair.”

As Stage’s artistic director, Hupp acknowledges that he likes to open the season with shows that have high theatrical appeal. As the recognized pinnacle of contemporary farce, “Noises Off” certainly meets that standard. Moreover, Hupp believes the time is especially appropriate for farce.

“It’s perfect for this moment when what we need and want is to be in room with other people and laugh, and for a little while get away from what’s going on outside of the theater,” he said.