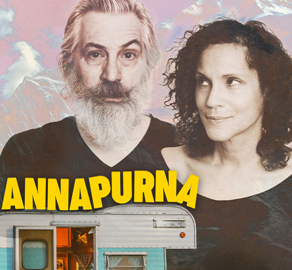 Syracuse, NY – “Annapurna” is the name of a massif in the Himalaya mountain range, the Hindu goddess of nourishment and the next play in the reimagined and fully digital Syracuse Stage 2020/2021 season. Written by Sharr White and directed by Stage artistic director Robert Hupp, “Annapurna” is a carefully balanced blend of sharp comedy and surprisingly tender drama that draws inspiration from both meanings of its title.

“Annapurna” will be available as video-on-demand March 17 – April 4 at www.syracusestage.org.

White’s solitary set for the play is a dilapidated trailer home in Paonia, Colorado. Though high in the Rockies, it is clearly not a playground for the rich and beautiful; it’s not Aspen, not Telluride, more Dollar Store than film festival. The trailer’s owner is a middle aged poet and ex-professor named Ulysses who, like his abode, has seen far better days. The oxygen strapped to his back owes less to the altitude and more to a lifetime of hard drinking and heavy smoking, and as is often the case in life as in art, careless and willful self-destruction radiates into a blast zone extending the damage beyond the targeted self. Enter Emma, ex-wife, twenty years estranged, part hard rock of reckoning and part angel of mercy. As Ulysses puts it, “Holy crap.” Why has she come? Why now?

Director Hupp has likened White’s play and his characters to those of the late great Sam Shepard. The comparison is apt in that Emma and Ulysses possess depth and breadth of feeling; they have passion, and like Shepard’s characters, they grasp the futility of resisting, no matter how much better judgment may incline them to do so.  Hupp also finds comic resonance in the television series “Shameless,” especially in the way White allows his characters to find humor despite—or even in defiance of—their less then idyllic circumstances. Emma and Ulysses are feisty and engaging, kindred and spirited spirits, and their verbal sparring is liberally laced with gleeful doses of biting wit.

To portray the fictional couple in “Annapurna,” Hupp has turned to real life married partners Dawn Stern and Stephan Wolfert. Wolfert appeared previously at Syracuse Stage as Mrs. Bennet in Kate Hamill’s “Pride and Prejudice.” He spent last fall as an artist-in-residence at Stage collaborating with Stern to develop adaptations of Shakespeare’s “Macbeth” and “Richard III” as part of their ongoing work with DE-CRUIT, an organization founded by Wolfert and dedicated to helping military veterans cope with trauma. At Syracuse Stage, Wolfert has also performed his one-man show “Cry Havoc,” which is based in part on his own military experience.

“I’m so glad to be working with Dawn and Stephan on ‘Annapurna,’” Hupp said. “The play seems tailor-made for them. And while we’ve not been in the same room during this process, the relationship between actor and director remains the same. They bring so much heart, humor and dedication to the work, not to mention sheer talent, that they transcend the imposed distance and make the remote immediate.”

In what can only be described as an extraordinary coincidence of life imitating art, Stern and Wolfert maintain their fulltime residence in a large van outfitted as a mobile home, not unlike Ulysses’ dwelling in the play. This was particularly fortuitous for Syracuse Stage because current actors’ union guidelines only allow actors to record performances from the safety of their own homes, as was the case with Patrese D. McClain performing “Twilight: Los Angeles, 1992” from her apartment in Chicago. With cameras supplied by Syracuse Stage and guidance offered remotely by video designer Kate Freer, Stern and Wolfert’s van became the rehearsal room and the “stage” setting for “Annapurna.”

“Working from my computer at home and collaborating with our team working across Syracuse and New York City, brings its own set of challenges to the creative process,” Hupp said. “This hybrid art form, created using our theatrical vocabulary but drawing on video and digital innovation and creativity, stretches our artistic muscles and allows for fascinating and dynamic storytelling. I’m anxious to share this work with our audience.”

In interviews, playwright White said that “Annapurna” had a long artistic gestation and evolved from three sources of inspiration. The first was the relationship of friends of White, a married couple, who developed an “intense intimacy” when the husband became terminally ill with emphysema. Then years after that experience, he read an article that profiled estranged couples brought together by illness even after years of separation.

The third inspiration came from the mountaineering book “Annapurna” by Maurice Herzog. “In mountaineering you hear a lot about ‘committing,’ which is essentially about forcing yourself into a place of no return, so that literally the only way to survive is to move forward. And there was so much that was obvious in that idea as a metaphor for a relationship,” White explained in the online publication @This Stage.

While the first and second of these inspirations inform the situation of the play, it is the last that speaks to the heart of “Annapurna” and its unabashed recognition of the enduring power of love—however tested—and the potential salve of forgiveness. Emma arrives at Ulysses trailer with a mountain of her own, a mountain made of suitcases. Their task together is to unpack the baggage of their lives and discover what remains.

As White explained: “Maybe really what the play touches on is just how briefly we’re actually here, and how deeply important it is that we all have someone who can peer through our life, no matter how much wreckage that inhabits it, and say, ‘You. I see you.’” 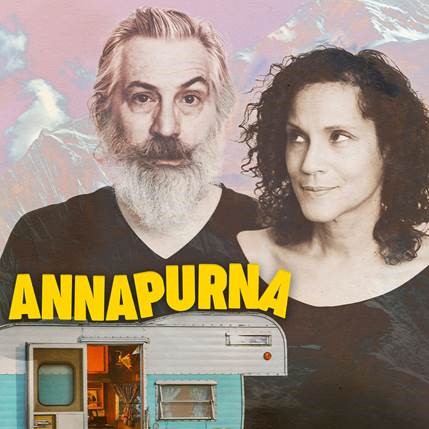 The actors and stage manager in this production are members of Actors’ Equity Association, the Union of Professional Actors and Stage Managers in the United States.

A recorded virtual pre-show discussion with artists who worked on “Annapurna.”

Prologue will premiere on March 19 online at www.SyracuseStage.org, where it will remain available for viewing through April 4.

Enjoy a virtual lecture “Family Drama: An Exploration of Real-Life Relatives On Stage” from Chris Woodworth, associate professor of theatre at Hobart and William Smith Colleges and the president of the Mid-America Theatre Conference, hosted by Associate Artistic Director Kyle Bass.

The Wednesday @ 1 lecture will premiere on March 24 at 1 p.m. online at www.SyracuseStage.org, where it will remain available for viewing through April 4.