(Syracuse, NY)—Special events during the 2014/15 Season at Syracuse Stage will kick-off with live music, tastings, lectures, and talks throughout the run of Vanya and Sonia and Masha and Spike, the Tony-Award winning “ripped-roaring” comedy running September 24 – October 12.

Following the opening night performance on Friday, September 26, the post-show party in the lobby will feature music by Castle Creek, with SAMMY award-winning vocalist Kim Monroe, and Chris Eves, who has toured with national acts including Justincase and American Idol. Complementary food from Phoebe’s Restaurant will be available for guests, and the Stage bar will stay open late.

On Thursday, October 2, Happy Hour will start at 6 p.m., a free event with cider and donuts for grown-ups. Fall-themed martini tastings will be offered by World Lounge & Martini Bar, and gourmet cupcakes and donuts will be provided by Picasso’s Pastries and Café. Half-priced drinks will be available at the Stage bar from 6 to 7:30 p.m.

For the Wednesday @ 1 Lecture series on October 1, Chris Woodworth, an assistant professor of Theatre at Hobart & William Smith Colleges, will speak on “Chekhov in PA: Durang’s Riff on Nostalgia, Longing, and the Importance of Place.” Wednesday Lectures take place at 1 p.m. in the Sutton Pavilion, before 2 p.m. Wednesday matinees.

Three times throughout the run, pre-show discussions with actors will take place as part of Stage’s Prologue series. Prologues are moderated, 20-minute discussions that begin one hour before select performances. Vanya prologues will take place on September 28 at 1 p.m., October 4 at 2 p.m., and October 9 at 6:30 p.m.

On Sunday, October 5 following the 7 p.m. performance, an Actor Talkback will take place in the theatre where audience members may interact with cast members. 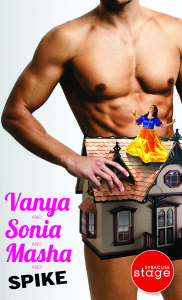 Vanya and Sonia and Masha and Spike is Christopher Durang’s 2013 Tony Award-winning comedy celebrated by The New York Times as “deliriously funny.” Smashing together Chekhov’s classic themes of loss and longing with really impressive abs, Disney’s Snow White, and a prophetic housekeeper, Vanya turns a dysfunctional family’s reunion into a weekend of hilarity. The result is raucous comedy that plays like Arrested Development.

The Syracuse Stage production of Vanya and Sonia and Masha and Spike is made possible through the support of generous sponsors. The Presenting Sponsor is Pomco Group. The Sponsor is NBT Bank. Media Sponsors are iHeartMedia, Business Journal News Network, and the Syracuse New Times. The 14/15 Season Sponsor is Syracuse Media Group.

Chris Woodworth, Assistant Professor of Theatre at Hobart & William Smith Colleges, on “Chekhov in PA: Durang’s Riff on Nostalgia, Longing, and the Importance of Place” 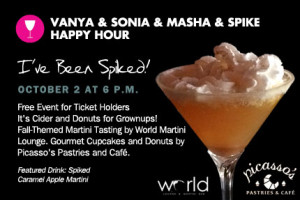 Gourmet donuts and cupcakes provided by Picasso’s Pastries and Café.