A screenshot from the first “Poetry & Play” reading, “White Egrets, no. 6 (‘For August Wilson’), by Derek Walcott, read by Keith Randolph Smith.

The online video series is an extension of an existing live performance series that paired poets and poetry with similarly themed Syracuse Stage plays. The move to presenting the series online is part of Syracuse Stage’s response to the closure of theaters due to Covid-19. The online version will feature poets and actors self-recording and reading poems written about experiences in the theatre. 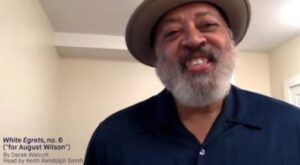 The poems are like “love letters to the art form we miss so dearly,” said Kyle Bass, Syracuse Stage’s associate artistic director who is curating the series with Martin, an award-winning poet and Syracuse resident. “It’s been very rewarding to engage with some of the country’s best poets who love and write about theatre or live performance in their work,” said Bass.

The series had an informal start several weeks ago when Broadway and film actor Keith Randolph Smith, who in the 1990s appeared in Stage’s production of “Holiday Heart,” read Derrick Wolcott’s “White Egrets, No. 6 (‘for August Wilson’).” The video was distributed through Stage’s online newsletter “StageView” and on social media and is still available on the theatre’s website at https://syracusestage.org/poetryandplay.php.

Upcoming poems will be released on the website twice monthly on Mondays beginning today. Readings scheduled for release include Gregerson’s “Ex Machina,” Hadas’ “At the Tempest,” Yezzi’s “Exit Pursued” and Bennet’s “In Defense of Henry Box Brown.”

Bass and Martin conceived the idea for the series while discussing plans to compile and edit an anthology of poetry and prose about theatre. The pair recently collaborated when Syracuse Stage presented an online reading of Martin’s new translation of Euripides’ tragedy “Medea” as part of the Cold Read Festival of New Plays. Bass said that in addition to celebrating the theatre, he hopes the series will remind viewers of the performative aspects of poetry reading and that they will enjoy poetry’s capacity to soothe and to bring comfort.

“However long viewers are engaged in a poem, hearing it read, whether it be thirty seconds, a minute, two seconds, or three,” Bass said, “I hope they will not have regretted that time that they will never get back, that they feel that it was worth it.”

A new entry in “Poetry & Play” will be online at syracusestage.org every other Monday starting October 5.

Charles Martin is a poet, critic and translator whose many awards and accolades include a Pushcart Prize, the Bess Hokin Award, the Literature Award from the American Academy of Arts and Letters and fellowships from the National Endowment for the Arts and the Merrill Ingram Foundation. He was poet in residence at the Cathedral of Saint John the Divine in New York City from 2005–2009, and has taught in The Writing Seminars at Johns Hopkins, at Queensborough Community College, Syracuse University, in the Stonecoast low-residency M.F.A. at the University of Southern Maine and at the School of Letters of the University of the South. He has also taught workshops at the Sewanee Writers Conference and the West Chester Poetry Conference.

Rachel Hadas is the author of numerous books of poetry, essays and translations. Her latest collection is “Poems for Camilla” (2018); “Love and Dread,” a new volume of poetry, is due out in the fall of 2020, and “Piece by Piece,” prose selections, in the spring of 2021. The recipient of honors including a Guggenheim Fellowship and a Director’s Fellowship at the Cullman Center for Scholars and Writers, the New York Public Library, Rachel Hadas is Board of Governors Professor of English at Rutgers University-Newark, where she has taught for many years.

Joshua Bennet is the author of three books of poetry and literary criticism: “The Sobbing School” (Penguin, 2016)—which was a National Poetry Series selection and a finalist for an NAACP Image Award—“Owed” (Penguin, 2020), and “Being Property Once Myself” (Harvard University Press, 2020), which was a winner of the Thomas J. Wilson Memorial Prize. Bennett holds a Ph.D. in English from Princeton University, and an M.A. in Theatre and Performance Studies from the University of Warwick. His writing has appeared in “The Nation,” “The New York Times,” “The Paris Review,” “Poetry” and elsewhere. He has recited his original works at venues such as the Sundance Film Festival, the Clinton Global Citizen Awards, the NAACP Image Awards and President Obama’s Evening of Poetry and Music at the White House.

Linda Gregerson is the author of six collections of poetry, most recently of “Prodigal: New and Selected Poems” (Houghton Mifflin Harcourt, 2015). She is also the author of two critical monographs and numerous essays on early modern English and contemporary American poetry. Among her honors are fellowships and awards from the American Academy of Arts and Letters, the Poetry Society of America, the Modern Poetry Association, the Institute for Advanced Study, the National Humanities Center, the National Endowment for the Arts, the Guggenheim, Mellon and Rockefeller Foundations. Gregerson is the Caroline Walker Bynum Distinguished University Professor at the University of Michigan, a Chancellor of the Academy of American Poets and Fellow of the American Academy of Arts and Letters. She is currently completing a seventh volume of poems.

David Yezzi’s latest books of poetry are “Birds of the Air” and “Black Sea” (Carnegie Mellon Poets Series). His verse play “Schnauzer,” produced by The Baltimore Poets Theater, was recently published by Exot Books. His libretto for David Conte’s opera “Firebird Motel” has been performed widely and is available on CD from Arsis. A former director of the Unterberg Poetry Center of the 92nd Street Y in New York, he teaches in the Writing Seminars at Johns Hopkins and edits “The Hopkins Review.”

Syracuse Stage Founded in 1974, Syracuse Stage is the non-profit, professional theatre company in residence at Syracuse University. It is nationally recognized for creating stimulating theatrical work that engages Central New York and significantly contributes to the artistic life of Syracuse University, where it is a vital partner in achieving the educational mission of the University’s Department of Drama. Syracuse Stage’s mission is to tell stories that engage, entertain and inspire people to see life beyond their own experience. Each season 70,000 patrons enjoy an adventurous mix of new plays, and bold interpretations of classics and musicals, featuring the finest theatre artists. In addition, Stage maintains a vital educational outreach program that annually serves more than 15,000 students from 14 counties. Syracuse Stage is a constituent of the Theatre Communications Group (TCG), the national organization for the American theatre, and a member of the Arts and Cultural Leadership Alliance (ACLA), the University Hill Corporation and the East Genesee Regent Association. Syracuse Stage is a member of The League of Resident Theatres (LORT), the largest professional theatre association in the country.