The Institute for Veterans and Military Families (IVMF) veteran reintegration program will be awarded a $5 million Walmart foundation grant. The check presentation will take place during halftime of SU/NC State football game at the Carrier Dome on Saturday, Nov. 12.

The Walmart Foundation has made a $5M grant to the Institute for Veterans and Military Families (IVMF) to support the expansion of the AmericaServes model. To commemorate the donation, Walmart representatives will present a check to Syracuse University and IVMF leaders during halftime of the Syracuse game against North Carolina State. This game is also part of Military Appreciation and Scout Day at the stadium. Participating in the event during halftime of SU/NC State game will be; Syracuse University Chancellor Kent Syverud, Vice Chancellor for Strategic Initiatives and IVMF Founder Dr. Mike Haynie, representatives from the Walmart Foundation. 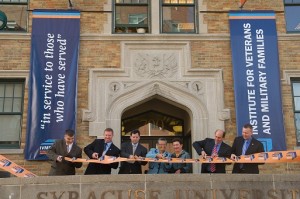 AmericaServes is an initiative that brings the public, nonprofit and private sectors together to better serve the needs of veterans, transitioning military members and their families. The additional funding will bolster ongoing programs in New York, North Carolina, South Carolina, Pennsylvania and Texas.

According to the Department of Defense, more than 185,000 military members will reintegrate into civilian life this year, and with over 45,000 vet-help organizations, veterans struggle to make sense of the vast ecosystem of assistance. IVMF launched AmericaServes to streamline and connect the services available in communities. The IVMF program is the nation’s first coordinated system of public, private and nonprofit organizations—a network—working together to serve veterans, transitioning service members and their families. Walmart’s significant donation of $5 million will accelerate the growth and impact of AmericaServes.