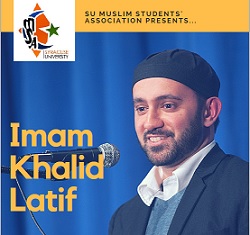 Syracuse, NY, February 22, 2018- Three years ago, three Muslim students were shot to death in apartment near UNC Chapel Hill. Today Muslims continue to face scrutiny by media and politicians across the United States. In response to Islamophobia, the Syracuse University Muslim Students Association is hosting an event to educate members of the Syracuse University campus community and the general public.

They’ve invited Khalid Latif, the chaplain and executive director of the Islamic Center at New York University to deliver a lecture on the topic “Fighting for Justice in a World of Injustice.” 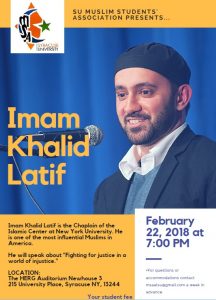 Khalid Latif, is one of the 500 most influential Muslims in the world as ranked by Georgetown University’s Prince Alwaleed Bin Talaal Center for Muslim-Christian Understanding.

Today’s world is filled with injustice. What does Islam have to say about this? What can be learned from the Islamic tradition that exposes a rich history while preparing humanity to solve today’s problems? Latif will touch on how Muslims can respond to continuing hatred from public figures and mass media. He’ll also discuss the climate of targeted hate crimes on Muslims in North America. The lecture will be followed by a question and answer session. The event is free and open to the public.

Who is Imam Khalid Latif ?

Imam Khalid Latif is the University Chaplain for New York University, Executive Director of the Islamic Center at NYU, and a Chaplain for the NYPD.   He is also the co-founder of Honest Chops, the first-ever all-natural/organic halal butcher in NYC, the Muslim Wedding Service, an agency specializing in providing charismatic and inspirational marriage officiants for wedding ceremonies, and a partner in the MKO Group, an investment group that owns and operates multiple Edible Arrangements franchises in Manhattan.   Each of these ventures was started to help generate revenue to assist people in need.

He was appointed the first Muslim chaplain at NYU in 2005. He was also appointed the first Muslim chaplain at Princeton University in 2006. Spending a year commuting between these two excellent institutions, he finally decided to commit full-time to New York University’s Islamic Center where his position was officially institutionalized in the spring of 2007. Under his leadership, the Islamic Center at NYU became the first ever established Muslim student center at an institution of higher education in the United States. Imam Latif’s exceptional dedication and ability to cross interfaith and cultural lines on a daily basis brought him recognition throughout the city, so much so that in 2007 Mayor Michael Bloomberg nominated Imam Latif to become the youngest chaplain in history of the New York City Police Department at the age of 24. Imam Latif was selected as one of 60 NYC leaders to serve on May Bill Deblasio’s Transition Team, helping to recommend and select individuals for key roles in the current NYC administration and also appointed to a “Task Force to Combat Hate” by NYC Public Advocate Tisch James to deal with the rise in Islamophobic, anti-semitic and anti-sikh sentiment in NYC.

Imam Latif has not only managed to solidify the basis of a strong Muslim community at NYU that seeks to emphasize inclusiveness and understanding of others without compromise, but has also worked tirelessly to foster dialogue with people of other faiths in order to clarify misconceptions and encourage mutual education.  His work has brought him to share stages with the likes of Pope Francis and the Dalai Lama, and many grassroot movements and diverse communities throughout the world.  Through his work Imam Latif has demonstrated not only an exceptional dedication to gaining and disseminating religious knowledge and values, but has begun to carve out a much-needed space for young American Muslims to celebrate their unique identity and have their voices heard in the larger public sphere.

In 2012, Imam Latif co-founded with NYU’s Vice-Chancellor Linda Mills, Rabbi Yehuda Sarna, and Chelsea Clinton the Of Many Institute, a groundbreaking programmatic model for multifaith leadership at the university level.  The OM Institute supports a new generation of religious and civic leaders who, deeply rooted in their own religious and spiritual traditions, reach across faith boundaries to solve social problems together.  Imam Latif currently serves as a Senior Fellow with OM and, amongst other things, co-teaches the popular course “Multifaith Leadership in the 21st Century” with his good friend Rabbi Yehuda Sarna.  Imam Latif and Rabbi Sarna’s friendship and work was documented in a film entitled “Of Many”, directed by Linda Mills and produced by Chelsea Clinton, that premiered at the Tribeca Film Festival earlier this year and has since received great reviews.

Imam Latif is a sought after speaker, having been invited to share his insights and experiences to diverse audience all over the world.  He has been featured in numerous media outlets including the Huffington Post, BBC, NPR, CNN, the New York Times, New York Magazine, The Colbert Report, Katie Couric, Newsweek, Time, BET and GEO TV. He has been named a Global Interfaith Visionary by the United Nations Temple of Understanding (2010), one of 100 NYC Luminaries by the New York Public Library (2011), one of the 500 most influential Muslims in the world by Georgetown University’s Prince Alwaleed Bin Talaal Center for Muslim-Christian Understanding and The Royal Islamic Strategic Studies Centre (2009 & 2010), a Millennial Leader for Social Justice by Auburn Seminary (2011), listed to the Christian Science Monitor’s “30 Under 30” list (2012), a Hollister Award recipient for his outstanding work in the Multi-faith World (2012), a Brass Crescent Award for Best Writer for his award-winning “Ramadan Reflection” series for the Huffington Post (2012 & 2013), a distinguished alumni service award from New York university (2014),  a “New NY Abolitionist” for his work around trafficking and forced marriage (2015), named to the inaugural “Mic 50” list by Mic.com, a celebration of the next generation of impactful leaders, cultural influencers, and breakthrough innovators from around the world (2015), received an Honorary Doctorate of Theology from Washington & Jefferson College (2016) and most recently the MLK Humanitarian Award from NYU (2017.)