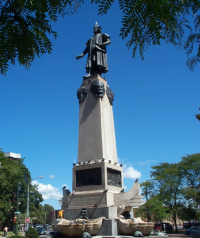 Scott Stevens is the director of the Native American and Indigenous Studies Program and an associate professor at Syracuse University’s College of Arts and Sciences.

According to Stephens, “The removal of the Columbus statue from its place of prominence downtown is welcome, even if the resolution to do so represents a compromise, and as with most compromises, it will not fully satisfy anyone. Doubtless, some portion of the Italian-American community would prefer nothing be done to the statue, while community members calling for its removal, particularly Indigenous peoples, might have hoped for a replacement statue honoring the original inhabitants of this region.

“In the end, the mayor has promised that the fountain and a remodeled base of the sculpture will remain and that ‘the new site will highlight the contributions of groups that have been oppressed, including Black and Brown Americans, Native Americans, Italians, immigrants and New Americans.’ This is a lot of work to be done by a single public space but perhaps it reflects the realities of the settler-colonial society in which we live.

“The term settler-colonial indicates a society composed of a majority of settlers and their descendants (i.e. immigrants) who live alongside the minority Indigenous communities they have dispossessed of their lands. In the U.S. this is further complicated by the presence of a large portion of ‘involuntary settlers’ (i.e. the descendants of enslaved Africans). I doubt such a public space could truly be a site of healing, as I have always viewed talk of ‘truth and reconciliation’ as lopsided when it comes to American history. But if the site were at least one of truth and recognition – in this case of our complicated and often conflicting relationships to one another’s respective communities – that would be a welcome change to a statue celebrating a figure who represents an on-going cataclysm for the Indigenous peoples of the Americas.”