All 238 paintings in Robert Shetterly’s masterwork portrait series “Americans Who Tell the Truth: Models of Courageous Citizenship” will be on public display for the first time en masse Nov. 29-Dec. 14 at Syracuse University. And the artist himself will be on campus for a discussion with two prominent subjects of his work: a former Citigroup senior executive who blew the whistle on Citi’s fraudulent mortgage practices in the mid-2000s and a crusading pediatrician and public health advocate whose research exposed dangerous levels of lead in the municipal water system in Flint, Michigan.

The portraits and accompanying narratives in the “Americans Who Tell the Truth” series highlight citizens who courageously address issues of social, environmental and economic fairness. Combining art and other media, the series “offers resources to inspire a new generation of engaged Americans who will act for the common good, our communities, and the Earth.” 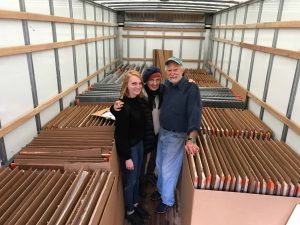 Major sponsor of the exhibition and the accompanying lecture is the Maxwell School’s Tanner Lecture Series for Ethics, Citizenship, and Public Responsibility in cooperation with the University Lectures and the Graduate Program in Museum Studies in the College of Visual and Performing Arts’ (VPA) School of Design, along with media sponsor WAER. 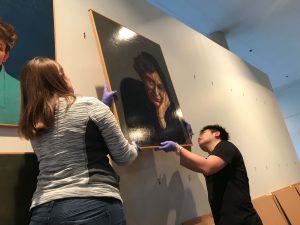 Museum studies students and faculty have been busy transforming the Schine Student Center’s Panasci Lounge into a gallery space suitable for displaying the many portraits in the series. Earlier this month, a museum studies team traveled to Shetterly’s Maine studio to pack and transport the paintings to Syracuse.

In an on-stage conversation on Thursday, Nov. 29, at 7:30 p.m. in Crouse College’s Rose and Jules R. Setnor Auditorium, Shetterly will be joined by Dr. Mona Hanna-Attisha, public health advocate and pediatrician at the Hurley Medical Center in Flint, Michigan, and Richard Bowen, senior lecturer in the Naveen Jindal School of Management at The University of Texas at Dallas. LaVonda Reed, professor of law and SU associate provost for faculty affairs, will moderate the discussion.

Both the exhibition and the lecture event are free and open to the public. American Sign Language (ASL) interpretation and Communication Access Realtime Translation (CART) will be provided for the lecture. 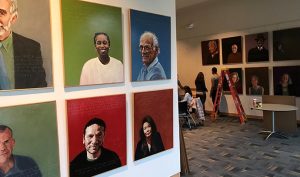 Hanna-Attisha is author of “What the Eyes Don’t See: A Story of Crisis, Resistance, and Hope in an American City” (Random House, 2018), her first-hand account of the Flint water crisis. Hanna-Attisha made headlines across the country in September 2015 when she sounded the alarm about the high presence of lead in Flint’s drinking water. She has received numerous honors for her efforts on behalf of the people—and especially the children—of Flint, including being named to Time magazine’s 2016 list of the world’s 100 most influential people.

Bowen is widely known as the Citigroup whistleblower. As business chief underwriter for Citigroup during the housing bubble financial crisis meltdown, he repeatedly warned Citi executive management and the board about fraudulent behavior within the organization. The company certified poor mortgages as quality mortgages and sold them to Fannie Mae, Freddie Mac and other investors. Citigroup responded by stripping him of all responsibilities, placing him on administrative leave and eventually terminating him. Bowen subsequently testified before the Securities and Exchange Commission, giving them more than 1,000 pages of evidence of fraudulent activities. In 2010, he was a key witness in the mortgage mishaps and gave nationally televised testimony before the Financial Crisis Inquiry Commission.

Shetterly was born in Cincinnati and graduated from Harvard College in 1969 with a degree in English literature. After moving to Maine in 1970, he taught himself drawing, printmaking and painting. While trying to become proficient in printmaking and painting, he illustrated widely. For 12 years he created the editorial page drawings for the Maine Times newspaper and illustrated the National Audubon Society’s children’s newspaper, Audubon Adventures and some 30 books.

His work appears in collections across the United States and Europe. Along with his “Americans Who Tell the Truth” series, he is well known for his series of 70 painted etchings based on William Blake’s “Proverbs of Hell” and for another series of 50 painted etchings reflecting on the metaphor of the Annunciation.

He began “Americans Who Tell the Truth” in the early 2000s in response to U.S. government actions following 9/11. Shetterly undertook the project as a way to deal with his own grief and anger by painting Americans who inspired him. He initially intended to paint only 50 portraits, but by 2013 the series had grown to more than 180 paintings. Today, it numbers 238. Portions of the series have toured widely across the United States, shown in schools, museums, libraries, galleries and other public spaces.

A few of Shetterly’s paintings have previously visited Syracuse. A small portion of the “Americans Who Tell the Truth” series was on display in March and April 2014 at VPA’s 914Works gallery.

An “Americans Who Tell the Truth” book featuring Shetterly’s first 50 portraits was published in 2008. He says the portraits have given him an opportunity to speak with children and adults throughout the United States about “the necessity of dissent in a democracy, the obligations of citizenship, sustainability, U.S. history, and how democracy cannot function if politicians don’t tell the truth, if the media don’t report it, and if the people don’t demand it.”

Shetterly is the subject of a documentary that’s in production, “Our Children’s Future: A Portrait of Robert Shetterly,” sponsored by the Union of Maine Visual Artists and directed by SU alumnus Richard Kane ’72. View the film’s trailer. Kane will be in Syracuse this week to record additional interviews for the film.

Shetterly is no stranger to SU. He has visited campus on several occasions as a guest lecturer, most recently in early October, speaking to students in the Cultural Heritage Preservation (IST 622/MUS 600), Studio 1: Practices of Artistic Writing (WRT 109), Solo Creation (DRA 374), Production Crew (DRD 115) and Teaching and Leadership for Social Justice (EDU 915) courses, as well as visiting an honors class studying human rights and the Maxwell School’s Program for the Advancement of Research on Conflict and Collaboration.

This week, he will be engaged in a full schedule of classroom appearances tied in to the exhibition, visiting VPA, the Falk College, the School of Education, the Whitman School and the Renée Crown University Honors Program.