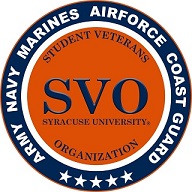 SYRACUSE, N.Y. (May 9, 2016) – The Veterans Resource Center and the Office of Veteran and Military Affairs (OVMA) at Syracuse University will hold the 2016 Commencement Celebration for Student Veterans on Wednesday, May 11, at 5:00 p.m., in the Miron Room 303, in Newhouse 1.

The ceremony will include welcome remarks from University leadership; introduction of the graduates; and a student address from 2016 graduate Jordan Robinson (veteran, U.S. Marine Corps), a Newhouse Public Diplomacy graduate student, and outgoing president of the Student Veterans Organization (SVO) of Syracuse University.

Mike Erwin (Major U.S. Army Reserves), the founder of Team Red, White & Blue, and president of The Positivity Project, will deliver the keynote address to the veteran graduates.

Mike Erwin is the Founder and President of The Positivity Project, and a Major in the U.S. Army Reserves. A 2002 graduate of the U.S. Military Academy at West Point, he served in the Army for 13 years, including three deployments to Iraq and Afghanistan. In 2010, Mike founded Team Red, White & Blue (Team RWB), a non-profit organization that enriches veterans’ lives by connecting them to their community through physical and social activity. He serves as the Chairman of the Board for the organization, now 177 chapters and 100,000 members strong. Mike earned his master’s degree in positive psychology and leadership, under the tutelage of Chris Peterson, from the University of Michigan — and taught leadership at West Point. He and his wife, Genevieve, live in the Village of Pinehurst, NC, with their four children.

A reception, to be held outside the Miron Room, will immediately follow the ceremony.