Syracuse, NY- An invasive species management project has just concluded this week at Schiller Park’s Roundtop in the Northside of Syracuse. This is just the beginning of a long process to clear the buckthorn thickets. 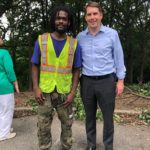 Mayor Walsh checked out the project Tuesday and said thank you to the team from Onondaga Earth Corp, Syracuse Parks & Rec and Syracuse Parks Conservancy.

The project led by Onondaga Earth Corps, Syracuse Parks Conservancy, City Parks Department and SUNY-ESF cleared thick invasive shrubs that have overtaken the once panoramic view of the City of Syracuse that the park was originally designed to bolster.
Schiller Park is a historically significant park that was designed in 1911 by David Campbell, former City Superintendent of Parks. The natural areas of the park have not received the maintenance needed to preserve the roundtop’s open spaces. Schiller Park once contained impressive stands of white and red oak trees, as well as sugar maple and white pine trees, but natural forests are being smothered by the invading buckthorn thickets.

“Our city parks offer some of the most beautiful vistas in the region,” said Syracuse Mayor Ben Walsh. “With the help of the Parks Department and our friends at Onondaga Earth Corps, the view from atop a section of Schiller Park will be restored to its original grandeur.” 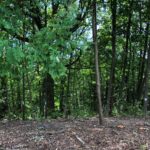 Jacob Erle, Graduate Student at SUNY-ESF describes the details of the project. “Group members will remove buckthorn plants from approximately 20,000sq.ft of land along Schiller’s Round-Top drumlin area. But for this invasive plant to be successfully managed, conservation efforts would have to continue three to five years post-cutting. It is a rigorous challenge but clearing areas of thick buckthorn opens regions up and we begin to rediscover our traditional park views. With the consistent support of the neighborhood to help remove invading plants we can restore Schiller Park to its natural beauty.”

When asked about invasive buckthorn in the city, Stephen Harris, Syracuse City Arborist said “Recent inventory by US Forest Service found there are more buckthorn in the city than any other species. If you are wondering what buckthorn looks like, go to the top of any of our Drumlins and try to look out. The plants blocking your view are mostly likely buckthorn.”

The team is starting with a small designated clearing to show the prospect of Schiller Park’s Roundtop to be a community space that can be enjoyed by residents and visitors alike. Crew members from the Onondaga Earth Corps are on site to help provide the manpower needed to clear out the dense brush that have overtaken the park. 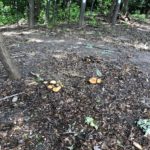 Leftover stumps from invasive buckthorn after removal. Marked trees to signify “do not cut”

Benjamin Loiselle, Project Coordinator at Onondaga Earth Corps, commented on the project saying “This is a great opportunity for youth in the community to broaden their horizons and connect with nature in the city in new and interesting ways. Removing the invasive buckthorn gives the youth a sense of accomplishment as well as pride and investment in the community.”

Chris Wiles with the Syracuse Parks Conservancy said “This is a great example of what can be done when public and private partners work together to enhance the efforts of a small group of volunteers like The Friends of Schiller Park to make a small part of the City more attractive.”

This experimental clearing concluded on August 13th. Partners hope that this project will raise awareness about the importance of historic preservation and natural land management and possibly lead to opportunities to grow this type of work in the city parks.