The red brick building is on the corner of West Genesee St and Liberty, brought back to life, by a combination of funding sources, this home is one of our most important landmarks. A place where abolitionist ideology and women’s suffrage met in the parlor, the residence built by Charles B. Mills, a man who taught black students and spoke at anti-slavery rallies. They became a family fleeing Ohio for the audacity to teach “Negros” how to read. They migrated to Syracuse which had become a gathering place for those in the abolitionist movement.

At that time 1851, Syracuse was a spirited center of abolitionist activity: The famed “Jerry Rescue” occurred. Syracuse was an active way-station on the “underground railroad” so effective in aiding and transporting hundreds of fugitive slaves that the city became known as the “Canada of the United States.” 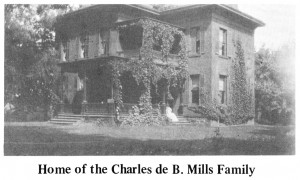 In 1855, Mills built the family home on the corner of West Genesee and Liberty Streets. It would become a station on the Underground Railroad. In 1857 August 9, Harriet May Mills is born in the family home, and would reside there her whole life. Visitors included abolitionists Frederick Douglass and Wendell Phillips, and a woman whose abolitionist activities led her to launch a women’s rights movement – Elizabeth Cady Stanton. Other feminists visited the Mills home in later years: Susan B. Anthony, Lucy Stone, Dr. Anna Howard Shaw, and Carrie Chapman Catt. Literary figures and transcendentalists A. Bronson Alcott and Ralph Waldo Emerson were also guests.

The couple, Harriet Ann Smith and Charles B. Mills’ daughter, Harriet May Mills would blaze a trail for woman through her dedicated support for the Women’s Suffrage Movement. Her middle name was given in honor of Samuel J. May, the Unitarian minister from Syracuse, nationally prominent in both the women’s rights and anti-slavery movements.

Harriet May Mills was the most prominent of Syracuse activists for the rights of women.  She was herself a protégé of Susan B. Anthony, having grown up in a home that hosted visits of the most famous of 19th century reformers. 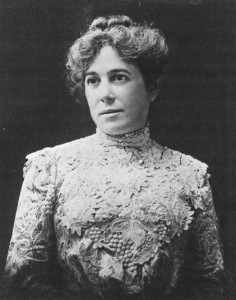 Harriet co-founded the Political Equality Club in Syracuse to address local suffrage concerns. Membership increased from 7 to 102 within four months. Harriet advised and directed its members that year in assisting with the State Woman Suffrage Association convention. According to the NYSWSA President’s report to the convention, “the young women were everywhere.”

In a letter from Susan B. Anthony to Harriet and her coworker, Isabel Howland, she expressed her delight in their work for and during the convention. “I am too proud of you two to keep still, so here goes my heart full of love and rejoicing over my two new young girls in Syracuse.”

Harriet, together with organizer-lecturer Mary Garrett Hay (later prominent in the League of Women Voters and the Republican Party), arranged public meetings in sixty counties across the state, to be addressed by Miss Anthony, then age 74, Dr. Anna Howard Shaw, physician, ordained minister, and a suffrage lecturer, spoke at forty of the meetings. In years to come, Shaw and Harriet frequently shared the suffrage speakers’ platform. At times, on weekends, they were part of an audience of conversations of Elizabeth Cady Stanton and Susan B. Anthony at the home of Eliza Wright Osborn in Auburn, New York. 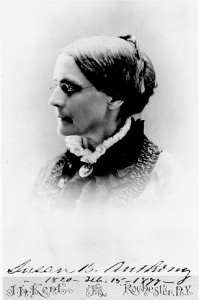 Harriet dauntlessly assisted in suffrage organization in Michigan and Ohio. She addressed the NAWSA convention on “The Winning of Educational Freedom.” She refuted arguments as to the predicted unhealthy effects of education by quoting statistics showing the health of women graduates was better than that of women who had never been to college. She noted the small proportion of college faculty who were women. She quoted other statistics, taken from the report of the U.S. Commissioner of Education for 1899, showing that women had given more than $50 million for scholarships and colleges.

“Standing on the threshold of the new century,” she said, “we behold the woman of the future thus armed, we see the fully educated woman possessed of a truer knowledge of the fundamental principles of government, we see her conscious of her responsibilities as a citizen, and doing her part in the making of laws and in the fulfillment of the ideal of democracy. Educational freedom must lead to political freedom.”

According to Anthony’s History of Woman Suffrage, no state was better organized for suffrage work than New York. Much of the credit was due to “Harriet May Mills, state organizer, daughter of C. D. B. Mills of anti-slavery record. A graduate of Cornell, she has devoted her youth and education entirely to the cause of woman suffrage.” 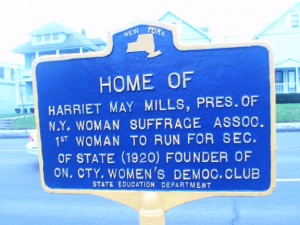 Throughout her life, Harriet May Mills worked for the interests of women.  As its President, she ran the NYS chapter of the National American Woman Suffrage Association from her home. After women won the vote in 1917, she supervised Eleanor Roosevelt’s work as an organizer for the NYS Democratic Party. The collections of papers of both Franklin D. and Eleanor Roosevelt, held in the FDR Library at Hyde Park, contain correspondence between them and Harriet May Mills during their Albany and Washington years.

She was the first woman to run as a major party candidate for public office, in 1920, and was later the first woman to serve as a member of the State Hospital Commission. In 1919, Harriet founded the Onondaga County Democratic Women’s Club. She was President until her death in 1935. The Women’s Building at the New York State Fair bears her name, The Harriet May Mills Women’s Building. 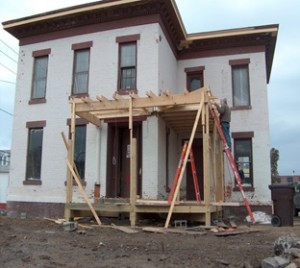 Restoration of the historic residence

As with many structures that were active stations on the Underground Railroad the building had fallen on hard times and required extensive work to save it. Most of the structures of the era are now demolished. However, unlike many of our city’s historic sites this structure was saved. Preserved to provide the type of service the Mills’ family would be proud of.

After purchase by Syracuse Behavioral Healthcare AKA “Brick House” in 2001, the Harriet May Mills House was placed on the National Register of Historic Places. The funding package for needed renovations was completed in November 2002, completed in 2004. At the time, the Harriet May Mills House was the first licensed halfway house for addicted women to be created in Syracuse, since the original SBH women’s residence was established on Green Street in 1969. 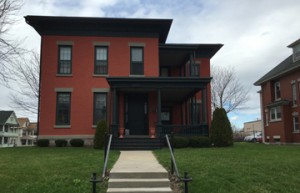 The unique by-product of the restoration stipulated by funding sources required the home be restored historically as much as possible to its original form. The firm Crawford & Sterns managed the historical preservation of the home. Carpeting, furniture and other features of the residence harkens back to a time when women couldn’t vote and slavery was legal. Very few people are aware that this home represents a legacy that dates back to an anti-slavery couple escaping an intolerant Ohio, settling here in Syracuse. Their daughter, Harriet May Mills went on to become indispensable in the local and national Women’s Suffrage Movement.    Compiled by Ken Jackson