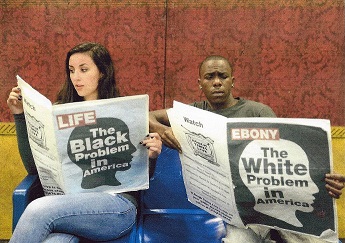 Forty years ago I was producing Alive in Syracuse, a community based weekly broadcast for WIXT-Channel 9. Bill Morris, who later built the LeMoyne College drama program to a level of national prominence, was Program Director at the SouthWest Community Center. He had experienced great success in staging two Ed Bullins plays with seven teens of color (for the record, one was a 42 year old recently released from incarceration who couldn’t find employment, but could pass for 18) and asked if I would get them on television for one show to keep their motivation up until he could figure out his next production.

The group met twice each week on the SWCC stage—none of them ever absent or late—to script and rehearse a half hour drama on aspirations. On the September Monday evening they were scheduled to tape at the Shopping Town studio, however, none of them showed up. I knew where they’d be, hanging out at a Kennedy Street playground. They could tell I was livid as I got out of the car, and began chorusing, “It was real? It was real?” They quickly explained their friends’ reaction to their boasting about their coming appearance on television. 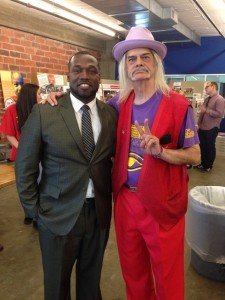 “No one’s gonna put you on television,” they quoted their friends’ dismissal. “Ain’t none of us on television.”  Indeed, at that time, few people of color graced America’s television screens.

They Had to Believe

At the playground they pressed me for another chance. When they finally taped their show, Larry Williams, now based at SWCC working for the city to deter turf crew members from negative behavior, announced, “We will be back.” They didn’t want to quit, and produced four other programs that season.

The next year Morris applied to the City-County Youth Bureau for funds to continue the activity of the Model Neighborhood Facility Television Workshop, but was told they would not be available for a project composed only of black city residents. So I called Bob Capone, with whom I had taught at Madison Junior High School, who had moved on to become principal at Jamesville-DeWitt High School. He allowed me to show program tapes to all the J-D juniors, and seven suburban Caucasian students applied for membership in what had become the Media Unit.

The following year the Cable came to town, and the Media Unit has been producing Rough Times Live weekly ever since.

Auditions for the Coming Stage Tour

In 1996 the Media Unit won several awards, including one from the NAACP for community service, for an original music theater performance, From the Back of the Bus, about the impact of racism on American teens. Performances were requested for Jackson, Mississippi; Louisville, Kentucky; New York City and Portland, Maine. 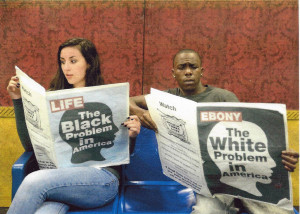 Two summers ago, with instances of racism flashing almost nightly on the news, the Media Unit reprised From the Back of the Bus for the teen group’s annual summer performance tour in collaboration with the Syracuse Department of Parks, Recreation and Youth Programs, with Centro donating buses to bring black and white youth groups together for donated theater space at Syracuse Stage, with performances followed by Dialog Circles on race, racism and racial healing conducted for InterFaith Works by Media Unit alum Derrick Dorsey, now a member of the Syracuse Board of Education and Executive Director of the local Boys and Girls Clubs.

This season, in collaboration with Prevention Network, the Paul Robeson Performing Arts Company, Seeds of Peace, Reach CNY and the Syracuse Coalition for Rights and Responsibilities, the Media Unit will be extending the tour to Central New York colleges as well as repeat performances requested by area youth centers. The goal for the group will be success at a statewide competition booked for the BeVard Theater in the Oncenter August 11 and 12. The dream is for a tour finale performance in Ferguson, Missouri.

Auditions for this season will be held Saturdays, October 31 and November 7.

Auditions are open to teens, ages 13 to 17, of all shapes, sizes, colors and conditions. Auditioners must call 478-8648 for an appointment. For cast, auditioners must sing A Change Gonna Come by Sam Cooke, obtain a monologue from the Media Unit studio at 327 Montgomery Street and learn a dance at the audition session. Crew positions are open for teens who demonstrate experience with sound, lighting, or video camera work and editing. A positive and respectful attitude is absolutely essential. The season will include a six week paid summer job.