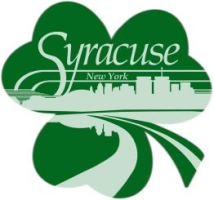 The Syracuse St. Patrick’s Day Parade has been postponed due to concerns about the COVID19 AKA Coronavirus. The 2020 St. Patrick’s Parade was to Take Place on Saturday, March 14.

Canceled-Due to the St. Patrick’s Parade on South Salina Street in Downtown Syracuse on Saturday, March 14, several streets downtown will be closed. The following information includes a street closing schedule, directions for access points, and a website for parking locations.

The Ceremonial Painting of the Stripe:

Salina Street, between Washington Street and Erie Boulevard West, will be closed from 9:00 a.m. to 10:15 a.m. for the Ceremonial Painting of the St. Patrick’s Parade Green Stripe at 9:30 a.m.

The following streets will be closed for the St. Patrick’s Parade at the following times (please note that times are approximate):

Directions to Get in and Around Downtown on Parade Day Saturday, March 14

For those coming downtown, some suggested routes are as follows:

From the West:  Take Route 690 East to the West Street Arterial.  Take a left onto West Fayette Street to South Franklin Street.  Take a right into Armory Square.  Take a left for some parking lots and garages close to Clinton Square.

From the North:  To access areas around Clinton and Hanover Squares, take Route 81 South to Spencer/Catawba exit.  Take a left onto Catawba Street to State Street.  Take a right onto State and continue south on State Street to James Street, Erie Boulevard East, Water Street, or Washington Street.

To access areas around the Everson, Civic Center, and OnCenter, exit at Harrison Street, bear right onto Harrison and continue west. Or exit Route 81 at Salina Street, take Salina southbound to Willow Street, take a left onto Willow to State and continue south on State Street.

For information on the location of various parking garages and lots downtown, visit www.downtownsyracuse.com, click on Map, and when the Map page appears, check Parking on the right-hand side of the page to access the information.