The Carrier Dome seats 49,262 people and sits on the campus of Syracuse University. Since its construction in 1980, the Carrier dome changed the skyline of the city with its pillow topped roof. It is the largest building of its kind on a college campus. When constructed, it was ahead of other colleges and universities which quickly allowed Syracuse University to break attendance records for major sporting events. That was then, now sports fans and industry observers all agree, it’s time for a new arena.

For observers, the new dome meant upgrades to what had long bothered many attendees, lack of air conditioning in a building bearing the name Carrier.  Several plans were floated to replace the aging structure, one through Gov. Cuomo with over 400 million dollars received the endorsement of then Onondaga County Executive Joannie Mahoney. Dreams of a new facility were squashed when the deal was immediately rejected by then Syracuse Mayor Stephanie A. Miner. Ideas for extending the university to Erie Boulevard along with an aggressive multi-tiered development plan for Syracuse were shredded. The relationship between the County Executive and Mayor became synonymous with a treat sold at Wendy’s, “Frosty”.

The University sought different options for the aged facility; eventually the Board of Trustees decided to invest in a massive makeover of the existing Carrier Dome, eliminating the iconic pillowtop opting for a structural solution.

Syracuse University the ambitious plan to transform the aged facility into a state-of-the-art arena has a price tag of $118 million dollars. 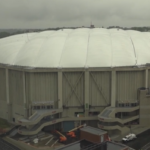 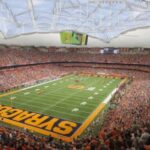 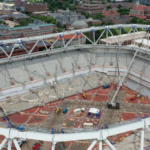 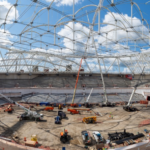 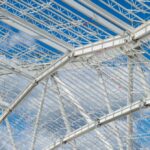 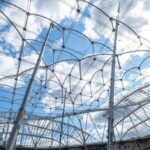 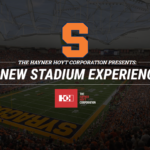 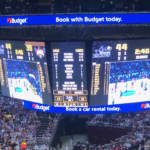 Score Board Sydney Australia, The Dome will have the 3rd largest in the country 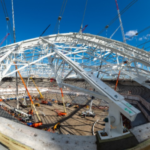 Sala continues, “We are now in second phase of roof structure going up (first phase was crown truss, this phase involves the cables you saw in video and installation of the actual roof.  There will be a ‘rigid roof’ beneath a ‘fabric roof.’ The big arches you see will support the fabric portion of the roof.” (the middle of the roof you see in the artist rendering photo).

In center of building, the scoreboard.  It’s the 3rd largest in the country, made by Daktronics.  Currently being built.

To get an idea of what’s going on “click” on any of the following links to get a birds-eye view of the massive construction site on University Hill.