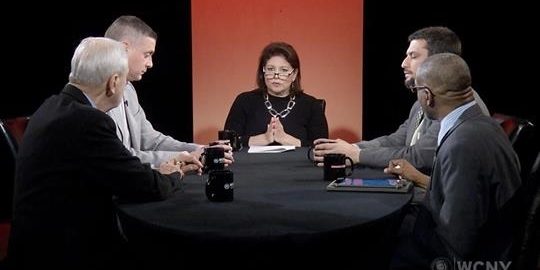 A few weeks ago I wrote and posted a column in support of the Community Grid, with conditions of course. Link to the following: To Grid or Not to Grid? That’s No Longer a Question

This program was taped a week before the New York State Department of Transportation issued their DEIS report that recommends the Community Grid. See DEIS released April 22, 2019 Draft Environmental Impact Statement on the Interstate 81 project

Watch for yourself click on the link to the actual Connect NY Progam and see how this heated discussion turned out.  Full Video “The Future of I-81 Connect NY “

60 years ago similar promises were made to a functioning African-American Community: A community with an Elementary School, Middle School and High school, all within walking distance of their homes.

In 1979, when I reviewed the Urban Renewal/Interstate 81 original plans, I found that they were signed by the local African-American Clergy. They signed on to a plan that never fully materialized. The growing African American Community lost, since many mitigation initiatives promised in the original plans; such as housing which took decades to replace, the Black Business community never recovered. And all of the neighborhood schools in the Black Community were closed, despite promises to keep them open and make improvements.

That’s why there has to be more than “artists renditions” and promises of “future things to come” , I went to that concert got the T-shirt and ticket stub.