New York, New York, September 15, 2020- An association of Black and other minority judges officially released a comprehensive Report to the New York State Court’s Commission on Equal Justice in the Courts (“Report”). The Report was submitted to Secretary Jeh Johnson, who was appointed by Chief Judge Janet DiFiore to be the Special Advisor on Equal Justice in the Courts. In the wake of the continued killing of unarmed Blacks and Latinos by law enforcement and the public outcry that followed, Secretary Johnson’s commission was tasked with reviewing the existing policies, practices and initiatives which impact institutional racism within the New York State Courts. The purpose of JF’s Report was to assist Secretary Johnson with fulfilling this mission. It concludes that systemic racism and unconscious bias exist throughout the New York State Court system.

To view Report to the New York State Court’s Commission on Equal Justice in the Courts click on the following: Judicial Friends Report on Systemic Racism in the NY Courts.9.14.20 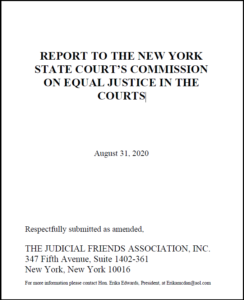 The Report discusses systemic racism related to the following areas of emphasis:

2) Assignment of cases and parts to judges, including the vast authority of administrative and supervisory judges, lack of diversity in these positions, assignment of judges to specialty parts and high-profile, high-value or notable cases and the lack of transparency in the process;

3) Court Officers, including their treatment of court users, Black attorneys and litigants, their selection and training, racism within the New York State Court Officers Association and little diversity amongst Court Officers, particularly in supervisory positions;

4) How implicit bias impacts the criminal justice system, particularly as it relates to the police, prosecutors and judges and the need for an auditing system to track judicial decisions based upon race and ethnicity and patterns of implicit bias;

5) Use of data to analyze statistics to highlight and eliminate racial and ethnic disparities in sentences;

6) The intersection between the courts and the police and prosecutors;

7) General court reform for widespread, lasting impact, including the following:

The Report also includes charts detailing a breakdown of the number of Black judicial and non-judicial staff for the past five to six years which indicate a lack of diversity in the court system, particularly in key positions of authority. As indicated in the Report, historically, racial minorities have been underrepresented in judicial appointments to the bench and in judicial and non-judicial supervisory positions. “Judicial racial diversity is essential to increase public confidence in the judiciary and the courts, provide decision-making power to formerly disenfranchised populations, and ensure equal justice for all. A racially diverse judiciary promotes an exchange of different ideas and points of view and reduces the effect of unintended racial, gender and institutional bias.”

After a comprehensive and exhaustive review of these issues, JF offered solutions to eliminate systemic racism and the effects of unconscious bias so that the court system can be a more inclusive and welcoming institution. Clearly, the judges took the lead in identifying ways to greatly improve the courts and combat racial bias and discrimination within the court system and beyond.

About the Judicial Friends Association, Inc.

The Judicial Friends Association, Inc. (“JF”) was established in 1976 by a group of Black judges within the State of New York seeking the fair and just treatment of minority judges, judicial staff and attorneys. JF serves to educate and advocate on behalf of the judiciary, court staff, and attorneys on issues affecting the court system.