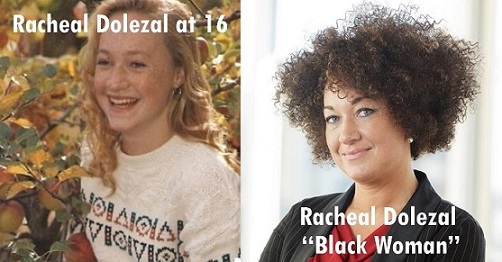 The leader of the local NAACP of Spokane, Washington Rachel Dolezal has been “outed” as not being what she says she is. Dolezal, who identifies as Black faced mounting pressure to explain herself as her birth parents made public statements to the effect that, “She’s white”. Immediately there was a firestorm regarding race and racial identity in America.

According to published reports Dolezal in 2004 lived in her uncle’s Idaho basement and identified herself as a white woman.  She went on in interviews describing herself as being “transracial” which immediately drew critique from those claiming she again was misappropriating identity. The term, transracial is associated with adoptions of a child by a family of a different race. Dolezal takes another slide down the slippery slope of lying.

Then there was an appearance of Dolezal’s two adopted African-American brothers on television adding credibility to her birth parents claims of this woman being white. One of her brothers went as far as saying, “she pulled me to the side and told me what she was doing, and asked me not to blow her cover”.

In a photo posted online she was with an older African-American man she identified as her, “Father”. 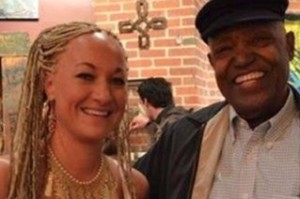 Racheal Dolezal identified this man as her, “dad”.

In her media interviews Ms. Dolezal clung to her belief that, “racial heredity, does not equal identity”.  Arguments between people erupted, when those seeking to re-define race ran into opposition to the act of race appropriation.

Social Media exploded with various memes graphically critical of the ruse that fooled people for over almost decade. Between 2005 and 2009 she changed her identity from white and began to self-identify as a Black woman.

However, in her Today Show interview she contradicts previous statements. She’s stated that she self-identified at age 5. But a photo of her at 16 shows a freckle faced white girl, a picture of herself at that younger age, she admits she didn’t self-identify then.

Her defender say, “She didn’t harm anyone” while many others lauded her work as an advocate for African-American causes.

The problem is not being white and leading a Civil Rights organization, many whites have held leadership roles in the NAACP and served admirably.

Rachel Dolezal’s problem boils down to one word, integrity. Being truthful and honest, some have defined it simply as, what a person would do when no one’s watching.  Ms. Dolezal has shown that she’s lacking integrity, a key quality in leadership. How is she to be believed if she files a Civil Rights complaint on behalf of the NAACP?   What about her claims of receiving hate mail? Postal investigators have concluded that the letter identified as, “hate mail” by Dolezal had to be placed in the Post Office Box by someone with a key.

The tragedy here is that we need allies of all races to overcome racism in America. This is not just a black, thing or a white, thing. This racial identity appropriation is about caring, perhaps caring a little too much.

Ms. Dolezal would have been accepted as a blond white woman, who loves Black hair, fashion and culture. Perhaps she could have been more helpful in educating whites about the scourge of racism, giving voice to the voiceless.

Instead, Dolezal is a cultural flashback,  a revised version of the 1959 movie classic, Imitation of life, a movie that follow’s the plight of a Black girl born to a Black mother who wanted to “pass” as white. How is this any different?