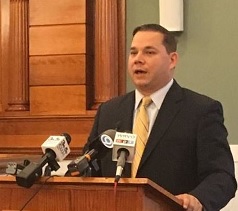 I anxiously awaited a copy of the text of the State of the County Address, fueled by a request for the text in which the response was, “yes”. The SOTC came and went and I waited and then, shortly after midnight It came, an email from the Onondaga County Executive’s Office. I was anticipating the SOTC, (I like reading policy stuff) Initial reports were positive therefore I wanted to see the details; the devil is always in the details. To my surprise instead of the promised text of the speech, it was a press release, an invitation to the First Zoo Story Walk. With all due respect I love animals, but I have photos of the County Executive greeting every new animal lodged at the Rosemond Gifford Burnet Park Zoo.

Not that I had requested something unusual, in fact, text of annual major speeches billed as, “State of the city/state, are usually supplied by Mayor Ben Walsh and Governor Andrew Cuomo upon request or in the case of Gov. Cuomo, voluminous detail about policy are always available for the publics review.

Throughout the African American community there’s a sense of unease as those who once fought the good fight on behalf of the community are now spooning with Onondaga County Government Leadership.

Incidents go without comment, such as the repeated disregard for the Minority War Memorial Monument Wall at the OnCenter. At well attended events it has become a popular place to stage a registration table or some other event related function. Directly in front of the Wall of Honor, dishonoring those who’ve served. Time after time, photos have been submitted to the Onondaga County Executive’s office, this reporting, spanning two administrations. Despite repeated assurances, even a letter from the company that manages the OnCenter Complex, stating that will not happen again. And yet, the behavior continues.

We have a new Diversity Officer, which has been long needed within the county. It does nothing to erase or mitigate the discriminatory behaviors exhibited not only by the county, but by contractors bought on to manage and construct these local projects.

Entrepreneurs are afraid to speak out, due to fear of retribution. You think Donald J. Trump has a vengeful dark side, upset a local leader and see how far you get.

Republicans have tightened their grip on local government and democrats have become Oscar nominated stars in their own silent movie. I’ve been counseled on many occasions about speaking up or out. “Shut up Ken, we now have a relationship with power”; What’s in a relationship when you must resort to games such as “Impoverished Musical Chairs” or “Broken Red-Light Green Light”?

Also, people need to examine which activists are piglets on the teat of funding. Receiving money while telling others to “be quiet” is hypocritical and disingenuous. When yawl was singing like Patti LaBelle, it was okay.

We live in an area that is undergoing great change. Block by block, you can see and hear the sound as jackhammers, piledrivers and excavators replace the thumping sounds of car music.

“All Politics is Local” – Tip O’Neill

Former democratic Speaker of the House of Representatives, Tip O’Neill is credited for coining the famous observation that, “all politics is local.” Therefore, all I can say in a vacuum is what I see from my little block. That’s as local as it gets. It’s also representative of the cries of those who have no voice, no neighborhood organization that appears to listen. These are the people who don’t go to TNT aka Tomorrow’s Neighborhoods Today. In fact, very few people in my immediate Far Westside neighborhood, 30 ft from the more affluent Tipp Hill, even bother to vote. I’ve repeatedly tried to get my immediate neighbor to vote, his reply, “They all lie”.

All I know is that I live on a block where the county allowed the unregulated burial of sewage into the ground for over 2 years. The county also told residents, that “the block” had no rights to flushing due to private ownership of the sewer. Recently, the sewer began belching voluminous sewer gas causing some to have doors open in the subfreezing temperatures.  We were just informed that other homes from an adjacent block also dump into our backyard sewer. These homes are assessed the same sewer fees and taxes. One resident is about to turn his home over to the land bank. Not only has he looked for the source of the sewage seeping into his home, he even dug up the yard, to view the pipe, to his surprise no breach.

City of Syracuse to the Rescue

For the first time in a decade, city officials arrived along with engineers to review the situation. Mr. Rooter emerged from (address deleted to protect the identity of the homeowner) and informed those in attendance, that sewage was oozing through the walls of the basement in the home. Several inches of raw sewage combined with sewer gas, a common feature, has become so bad that grandchildren can only visit the home on a limited basis due to the perceived toxicity of the gases.

Have you ever smelled the Metropolitan Sewage Plant on Hiawatha Blvd. in its full glory? Imagine that concentrated odor within a 1,000-foot home?  What’s sickening is that my neighbor, his daughter and grandchildren have lived under these conditions for years. My exposure was momentary compared to theirs.