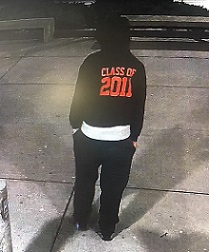 During that incident, a masked suspect entered the store with a handgun and encountered the employee victim, Asim Musa, 41 years of age, of Syracuse. During the ensuing altercation, Musa was shot. He was transported to Upstate University Hospital by AMR Ambulance, where he was pronounced dead a short time later.

Detectives from the Criminal Investigation Division have been continuously working on this investigation. Along with this press release, are two photographs of a suspect. The suspect can be seen wearing a light colored face mask, as well as a dark hooded sweatshirt with “Fowler Falcons” on the front, and “Class of 2011” on the back. Anyone who may know who is depicted in these photographs, or may have knowledge of the homicide is asked to contact the Syracuse Police Department at (315) 442-5222.  All calls will be kept confidential.  Anonymous information may also be submitted by using the “SPD Tips” App, available on Android and iPhones or called in to the Homicide Tip Line at (315) 442-5223.