Ken Jackson of urbancny.com on Friday December 10, 2021 held an extended conversation with Onondaga County Executive J. Ryan McMahon.  This has been a challenging time for a local government given multiple issues that face us; COVID-19 and its variants, a hospitality industry that’s been decimated by the reduced business caused by the global pandemic. There are questions about the allocation of American Rescue Funds with a clear divide between what democrats and republicans on the legislature. Human Services verses Economic Development? Top it off with accusations from democrats and others of racial Gerrymandering in the Redistricting process.

Jackson/urbancny.com What do you consider the most important issue in county government? 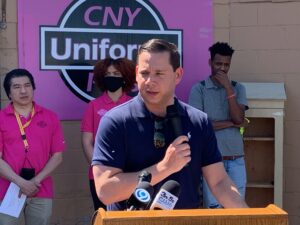 McMahon I think right now I would say addressing the pandemic. When I say addressing the pandemic, it’s not just singularly focused on covid cases. What we’re started to see right now even though the cases are elevating from Thanksgiving, the likely drop next week and the week after and then probably pick up after Christmas. The younger demographics have started to bear the brunt of these cases that’s why hospitalizations haven’t really gone through the roof.  We have all of these other pandemic impacts; we have mental health challenges related to the pandemic; we have an opioid crisis related to the pandemic. Certainly, keeping our kids in school, working out policies so kids aren’t unnecessarily quarantined, all of these things are pandemic driven. And at the same time trying to position ourselves for a strong recovery, this is what we’re focusing in on every day. It’s not about covid cases like it was in the beginning. We now know we have a vaccine. The vaccine efficacy is basically to keep us out of the hospital and keep us out of the ICU room with these variants we know there’s still a risk of getting it. Before the focus was get vaccinated it was very effective against the strains at the time from preventing covid Now it’s about getting vaccinated, get your booster so you don’t go to the hospital. And continuing to address all the other pandemic related impacts that lead to other public health impacts.

Jackson/urbancny.com How can we justify spending most of the American Rescue Funds on Economic Development projects?

McMahon That’s what they are for, they’re for recovery. Exactly what it’s for, stimulus funding. When you look at what we’ve spent it on there’s a balance of projects that fit within our PIE platform to address Poverty, modernizing Infrastructure, and support the Economic sectors that have been hit the hardest by the pandemic. All of those are within that framework.

Jackson/urbancny.com Is it possible to leverage a smaller portion of the American rescue Funds leaving more funds for more pressing needs?

McMahon I don’t know what the more pressing needs are with that pot of money. Is there something specific that’s being referenced?

Jackson/urbancny.com We have suburban blight; we have an old housing stock which has lots of lead in it. So, I think there are certain needs that are perhaps on the social services or on the human capital end of it. And there’s been criticism that there’s been a lack of that. The question is how is that being balanced?

McMahon: Let me take that head on, It’s a criticism from some of the legislature members about Human Services and departments. Quite frankly, they don’t know what they’re talking about. We have over 400 positions right now that we’re hiring in those spaces. I’ve heard certain legislators and those are political talking points that were used during an election cycle, and they lost the elections, especially off those talking points. When you look at the “Flip the Leg” movement, they didn’t flip anything. Related to that, those are talking points by part-time legislators that don’t know really, any data, they don’t run government they’re part-time legislators, most of them have other careers. In this whole process we’ve always said, ‘the small-minded either-or approach isn’t where we are.’

When you look at it. There are other governments as well that received a lot of money, the city of Syracuse being one of them, towns and villages all received rescue plans, those are the local governments that deal with housing. We come on from a metropolitan standpoint and we complement where there’s plans. But we don’t do code enforcement, they do. But when you look at some of our American Rescue Plan Funds, we are investing over 3 million dollars with the Onondaga County Neighborhood Initiative for low interest loans throughout the county for 1% loans in partnership with Home Headquarters. We have a Veteran’s grant program for housing as well. So, we do have housing dollars in the plan, they just haven’t been really talked about items.

Jackson/urbancny.com Legislator Elect Charles Garland has released a statement regarding the new 16th Legislative District Proposed Boundaries. He claims based on a review of the maps it’s Gerrymandering

McMahon: We disagree. I vetoed the maps when I looked at some of the concerns of 16. You can’t “pack” all the African American interest into one legislative district. That’s actually “Packing”, is something that is illegal and against New York State rules.  The new changes to the new Legislative District 16, it would continue to be a dominant minority district. The African American percentage would be the super majority but also with the new maps you’d have a majority minority district in legislative district 15 as well as legislative district 9. There are actually more majority minority districts now, then what the democrats proposed, than what there was before. You can’t go into this process knowing that you are vulnerable to a lawsuit because of “packing”.  We’ve talked with legislator Elect Garland about this, I met with him. I vetoed maps before because the concern, but I think the new maps address the concerns related to Legislative District 16.

Jackson/urbancny.com According to Garland, the district has a population that’s 61% African American. In a Court of Appeals First Circuit case, Latino Political Action Committee Vs. City of Boston decision found that “packing” of Black voters does not discriminate against Black Voters

McMahon: I appreciate what legislator Garland says, we have lawyers who look at this, they are the county lawyers not Charles Garland, not Ryan McMahon. The County Attorneys are saying they have serious concerns on two things. 1. Decreasing the number of majority minority districts and 2. “packing” all of the African American community essentially into one district; dilutes the African American communities voice on the electoral body overall. That’s the lawyers whose job it is to protect the county from lawsuits, but also to make sure the legislature is acting within the guidance of the state and federal laws and that’s been the advice of legal counsel.