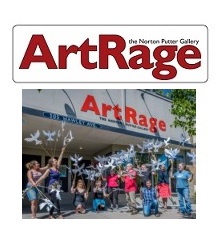 Photographer Michael Greenlar will be our host. Cree Hunters of Mistassini is an award winning documentary film from 1974 that follows a group of three Cree families from the Mistassini region of Quebec, as they set up a winter hunting camp near James Bay and Ungava Bay. The film draws parallels to the lives of those documented in Michael Greenlar’s exhibition “Kokom Lena of the First Nation Algonquin.” For thousands of years, the Cree Indians of James Bay inhabited the northern Quebec forests – originally gathering wild rice, and later hunting, fishing, and trapping. Traditionally, small groups of families spent the winter months together in the bush, subsisting on moose, beaver, deer, wild geese and caribou. 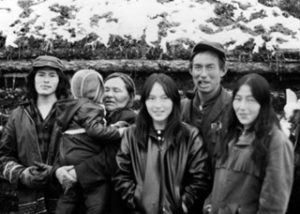 Filmmakers, Boyce Richardson and Tony Ianzelo traveled to Mistassini to speak with Cree friends, pledging that their film would allow Native people to tell their own stories, and filming went ahead with three hunting families in the bush, over five months from 1972 to 1973. Produced by the National Film Board of Canada Cree Hunters of Mistassini received the award for Best Documentary at the Canadian Film Awards as well as the Robert Flaherty Award for best one-off documentary from the British Academy of Film and Television Arts. Screened with permission from the National Film Board of Canada. 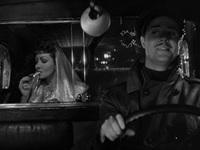 Directed by Mitchell Liesen, Written by Billy Wilder and Charles Brackett and starring Claudette Colbert, Don Ameche, John Barrymore and Mary Astor. Every Cinderella has a midnight!  In this screwball fairytale comedy, down-on-her-luck Bronx showgirl Eve Peabody finds herself stranded in Paris. Trying to ditch a  cab driver who is determined to be Prince Charming, Eve mistakenly wanders into a high society salon, only to be taken under the wing of a distinguished millionaire. But this is a fairy godfather with a plan: he wants Eve to break up his wife’s affair with a gigolo. Deftly skirting censorship restraints of the day, the film sparkles with no-nonsense sophisticated wit, sharp plot twists and a first-rate cast. In 2013 Midnight was selected for preservation in the National Film Registry by the Library of Congress as being “culturally, historically, or aesthetically significant.” “Films like Midnight should strike more often.” – NY Times SHARE ON FACEBOOK 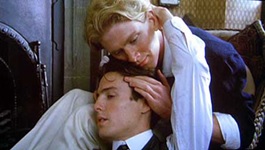 Directed by James ivory based on the novel by E.M. Forster and starring James Wilby and  Hugh Grant. Set in the rigidity of pre-World War I English society, Maurice tells the story of Maurice and Clive who find themselves falling in love in Cambridge. In a time and place when being gay means imprisonment, the two must cloak their feelings in secrecy. But when a friend is disgraced and jailed for “the unspeakable vice of the Greeks,” Clive abandons his forbidden love to marry a young woman. Maurice, however, keeps struggling with his identity. But all that changes when he is seduced by an appealing and adoring young male servant, an event that will change Maurice’s life and his understanding of the meaning of love. “A must-see! A candid film whose beauty and importance has only increased with age.”— Guardian
SHARE ON FACEBOOK

KOKOM LENA of the First Nation Algonquin – The Photographs of Michael Greenlar (use the link to view the catalog!)
February 2 to March 23, 2019

Syracuse photographer Michael Greenlar documented four generations of Algonquins in the bush of Quebec, Canada for almost 20 years.The work focuses on the matriarch Lena Nottaway and the knowledge she passed on through her 15 children. Lena taught Kokomville how to utilize every element of the environment to become a self-sustaining community. The series is a testament to the cultural survival of the Algonquin people of Barrier Lake, La Vérendrye Park, Quebec, Canada.

Despite broken treaties and clear-cut logging, these First Nation people continue to use the land as their traditions dictate. The exhibition is in partnership with Skä•noñh – Great Law of Peace Center. Please plan on visiting both venues to enjoy the complete experience of this photography series; you’ll see different images at each gallery.

Saturday, February 9 from 7 to 10pm at Bishop Harrison center. Silent Art Auction to support Ed Smith School. Come to bid on a variety of pieces by local artists! Stay for an evening of fun company and a few drinks! $10 pre-order tickets by emailing edsmithartauction@gmail.com or $15 tickets at the door. Tickets include one free drink. 7pm – silent auction and drinks with light refreshments. 9pm – Live music by Sonic Youke!

Wednesday, February 13 at 5:30pm – Racial Justice Awards – InterFaith Works’ Ahmad and Elizabeth El-Hindi Center for Dialogue will present the 2019 Racial Justice Awards during a special reception at Syracuse Stage. The awards ceremony will be followed immediately by the first preview performance of “Native Gardens.”

Mike Powell will be performing as part of The Folkus Project on Friday,  February 15, 2019 at 8 PM. The concert will be held at May Memorial Unitarian Universalist Society, 3800 East Genesee Street, Syracuse, NY 13214. Admission is $15. Advance tickets and more information can be found at www.folkus.org.

February 17, 2019, the Northwest Family YMCA will be holding a free Acoustic Music Jam from 2-4 pm. Folk, Traditional, Country, Bluegrass, Rock and Pop music is welcome. The Jam is open to all ages and skill levels, members and non-members alike. No registration is required. Bring your musical instruments (guitar, voice, banjo, mandolin, flute, etc.) and music stand. Come join in the fun or just to listen. The Jam is hosted by Steve and Karen Pfanenstiel (315-638-4740). The Northwest Family YMCA is located at 8040 River Road, Baldwinsville, NY 13027. For more information, contact Renee Storiale at 315-303-5966 ext. 225 or rstoriale@syracuseYMCA.Org. To learn more about the YMCA, go to http://www.ycny.org.

Friday and Saturday, February 22 & 23. The Bear Garden Cabaret presents A Benefit performance to support the work of Friends of Dorothy. Nick Orth in Grand Passions and Other Misfortunes…Songs From a Queer Bear’s Life. With Rick Reina and Joe Downing. Two Shows each night – 6:30 and 8:30 pm. Seating is limited so reservations are a must! Call for details and to reserve your cabaret seat. 315 424-0783. Friends of Dorothy, in the tradition of the Catholic Worker Movement, is an initiative to be supportive of people with HIV/AIDS in a variety of ways, including home-based care, hospice care, supportive housing and emergency assistance. The Bear Garden is a tiny pop up “Cabaret” hidden away in the Hawley-Green home of  Will Doswell and Joe Downing. The evening’s performance includes wine, hors d’oeuvres and scrumptious sweets. While there is no admission charge, this private event will offer you an opportunity to support the work of Friends of Dorothy.

Employment Opportunity: The Gage Foundation is offering a temporary position of Deputy Director from March 6 to June 1, running the day-to-day operations of the Gage Center. 20 hours a week, Tuesday through Friday from 10:00 to 3:00, with some possible flexibility in hours. Pay is $15.00/hour. We’re looking for someone with office, customer service and light bookkeeping experience. Please help us spread the word. If you’re interested, send resume with references and a cover letter to: matildajgagefoundation@gmail.com by February 8.