Whenever there’s an event to collect recyclable items in bulk from the general public, it’s a logistical nightmare, people arriving in vehicles filled with old broken or outdated electronics.  Since municipalities ended collection of electronic items such as televisions and computers, recycling events offer people an opportunity to get rid of these items.  Simultaneously, there was a Dog Show at the Empire Expo Center that drew spectators and participants from all over the country.

All traffic to the Fairgrounds was directed to Gate Number 7. Once at Gate 7 the double lane of traffic slowly worked its way past fair parking lots to the horse stables, where vehicles going to the Dog Show were peeled off to another lane for event parking. Those attending the Dog Show were held up for at least an hour before they were separated from the recycling onslaught. 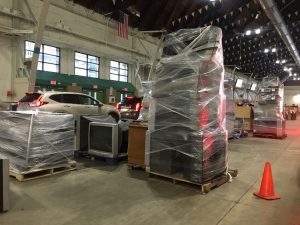 It took roughly one hour and fifteen minutes to get from the New York State Fair Main Gate through the line that eventually ended up inside the Center of Progress Building. Once inside, the drive-through resembled a digital carwash, an operation of efficiency as you drove from station to station items are taken out of vehicles as they reached certain points. Televisions, Computers, Printers and accessories, all had their area. As the discarded digitals items were unloaded, another crew pilled them up on pallets and shrank wrapped them.

Unfortunately, according to multiple reports the Dog Show had to delay, due to a judge being held up in the traffic jam. No telling how many people were discouraged by long lines and decided to skip the event all together.  There are multiple gates at the facility that could have been used to separate the deluge of vehicles as some wondered, “Why would they route all traffic through one gate? “

Social media was aflame with statements, as summed up; the sentiment felt by many Dog Show attendees, “people have spent over $1,000 to participate, coming to Central New York from all over the country, what a welcome!”