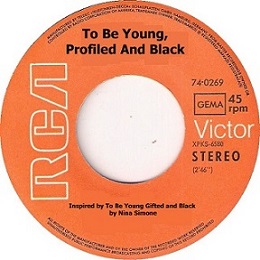 Marvin Gaye’s What’s going On? and other songs were commentary on issues and conditions of the day.  Stevie Wonder’s You Haven’t Done Nothing, was directed at Richard Nixon. Prince’s Dear Mr. Man, where he pens a letter to, “the man”. Nina Simone’s To Be Young, Gifted and Black, written during the time of natural hair and dashiki’s was inspirational and moving. An affirmation of pride, not unlike James Brown’s Say it Loud I’m Black and I’m Proud, gave permission to be unapologetically Black. Perhaps in today’s climate the acknowledgement that there’s a problem with being profiled, a re-writing of this classic is appropriate for 2016.

In America, now you know
There are millions of boys and men
Who are young, profiled and black,
And that’s a fact!

Young, profiled and black
We have long told our young
There’s a land different for you
This is a race that’s not been won

When you’re beaten til blood flow
Yeah, there’s a tragic truth you know
When you’re young, profiled and black
Your soul’s attacked

Young, profiled and black
How do we ever know the truth
They want to turn the clock back
And I am threatened by the Blue

There is no joy today
Is that it’s so hard to say
To be young, profiled and black
That’s where we’re at

Inspired by the original Songwriters: Simone, Nina /To Be Young, Gifted And Black