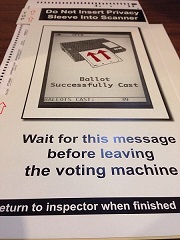 Today is Election Day for the General Election. Most offices on the ballot are local, An Assembly vacancy and Syracuse City Elected Offices are also on the ballot today.  It is also known as an, “off year” election, this is when turnout is low because there’s no Presidential Election to draw more people to the process.

Turnout among democrats take the largest hit during off year elections, with voter participation plummeting.

What to Look For

Pamela Hunter is poised to win the Assembly seat vacated by Sam Roberts as he took a position in Governor Cuomo’s administration.  During the last election cycle, a presidential year the republican challenger John Sharron received 46% of the vote. Fast forward to 2015, a year where there’s no drawing race at the top of the ticket, Sharron could pull an upset if democratic voters stay home.

Hunter has been helped by Albany democrats with multiple mailings and an aggressive Get-Out-The-Vote effort in the democratic voter rich 17th ward.