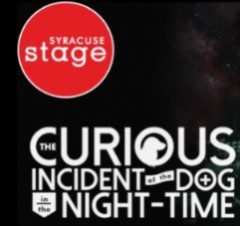 SYRACUSE, NY – Syracuse Stage brings a deeply moving and engaging experience with the Tony award-winning (Best Play) show “The Curious Incident of the Dog in the Night-Time,” adapted by Simon Stephens from the original novel by Mark Haddon. “Curious Incident” is co-produced with the Indiana Repertory Theatre (IRT) and received rave reviews from IndyStar, part of USA Today’s news network. It calls the play “a heart-warming coming-of-age story.”

Syracuse Stage and IRT are among the first regional, non-profit theatres to receive the rights to produce “Curious Incident,” which has previously only played on Broadway, in London’s West End and on national tour. This co-production is the first featuring an actor on the autism spectrum, Mickey Rowe, to play the lead role (also on the autism spectrum).

The lead in “Curious Incident” is 15-year-old Christopher Francis Boone who is intent on solving a neighborhood mystery. Though Boone often struggles to make sense of the chaos around him, he performs feats of mathematical memory and calculation, observing the world with an instant perceptiveness. Along the way, Boone’s determination and brilliance lead him to discover not only secrets about his family, but his own strength and courage.

Artistic director Bob Hupp said he is looking forward to having Rowe play such a powerful and complex lead role.

“He’s (Rowe) not only a skilled actor, but also physically accessible,” said Hupp. “The role of Boone is very demanding intellectually, emotionally and physically, and I believe that Mickey brings all of that to the table through his passion and authenticity as an actor.”

Although Rowe had intensive speech therapy throughout elementary and middle school, he did not receive a formal diagnosis until he was a young adult. Rowe explained the importance of having people on the autism spectrum see themselves represented appropriately on stage and in media.

“The young actors in this country who have a disability need to see positive role models who will tell them that if you are different, if you access the world differently, if you need special accommodations, then theatre needs you! The world needs you,” said Rowe. “It is such an honor to represent the autistic community at the beautiful and incredible Indiana Repertory Theatre and Syracuse Stage. I am excited to be the first American actor to portray Boone because I have experienced some of the same challenges he has.”

Set designer Russell Metheny will further add to this engaging storytelling by creating a setting in which scenes flow effortlessly from one to the next, forming an all-encompassing and surreal environment that will pull the audience into the story as it transcends from the written word to the stage.

Under the direction of director Risa Brainin, the ensemble cast will revolve around Rowe, making him the center of the action. The ensemble will interact seamlessly to create a story encompassing truth, love and hope.

“When I saw the play on Broadway, it was an experience that I had never had before in theatre,” said Hupp. “I think it’s a fascinating story and gives insight into the lives of characters we may have never met on stage before. I am excited to see this story come to life with an incredibly talented creative team and cast.”

“The Curious Incident of the Dog in the Night-Time”

There will be 76 tickets available for whatever price patrons wish to pay. Pay-what-you-will tickets must be claimed in person at the Box Office on the day of the performance, subject to availability. The Box Office opens at 10 a.m. and will remain open through the start of the show. There is a limit of two tickets per person.

Oct. 29 Prologue at 1 p.m. (free for ticket holders)
An intimate, pre-show discussion with “Curious Incident” actors one hour prior to curtain. Bring your questions.

Nov. 1 Wednesday @ 1 Discussion (free for ticket holders)
At 1 p.m. in the Sutton Lobby, participate in a lecture with Syracuse University associate professor Christine Ashby, Ph.D. Ashby’s teaching and research focuses on inclusive education with specific emphasis on supports for students with Autism.

Nov. 2 Happy Hour at 6 p.m. (free for ticket holders)
Enjoy complimentary appetizers from Kitty Hoynes Irish Pub & Restaurant, half-priced drinks at our bar and a murder mystery patrons can solve, hosted by Happenings CNY, for the chance to win a prize pack from Visit Syracuse.

Nov. 4 Prologue at 2 p.m. (free for ticket holders)
An intimate, pre-show discussion with “Curious Incident” actors one hour prior to curtain. Bring your questions.

Nov. 5 Poetry & Play (free for ticket holders)
Starting at 12:30, this reading series connects the literary arts to the work on stage. Stephen Kuusisto, a Syracuse-based author and poet who has been recognized by the New York Times as “a powerful writer with a musical ear for language and a gift for emotional candor,” will share his original works that have been prompted by the themes, ideas and images in “Curious Incident.”

Nov. 9 Prologue at 6:30 p.m. (free for ticket holders)
An intimate, pre-show discussion with “Curious Incident” actors one hour prior to curtain. Bring your questions.

Nov. 11 Audio Described Performance at 3 p.m. for patrons who are blind or visually impaired.

Open Captioning at 8 p.m. Performance for patrons who are deaf or hard of hearing.

Nov. 12 Open Captioning at 2 p.m. Performance for patrons who are deaf or hard of hearing.