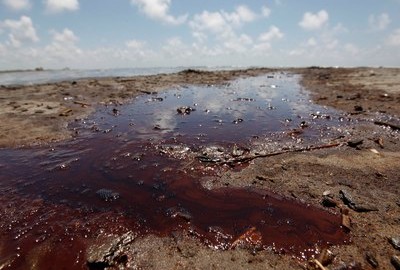 As oil gushes into the Gulf of Mexico and beyond there have been some interesting ideas floating around regarding what to do about the big oil slick in the water. These are the top ten:
10. Bunker Buster Bomb – Just send a bunker buster bomb down into the depths of the gulf and blast the Oil Well shut.

8. Dawn – Have you ever drizzled Dawn dishwashing detergent into a sink full of greasy water? The oil slick on the waters’ surface in your sink disappears, where it goes? Who cares! Plus their new packaging shows a cute little baby Seal with big brown eyes gazing at you from the packaging as if it were saying, “please buy Dawn so they can use it to clean my coat when I get stuck in this oil slick”. ($1 from the sale of every bottle of the product will go towards saving wildlife.)

7. Dyson Vacuum – You know that guy on television who takes great pride in the suction power of his revolutionary vacuum device with a ball? He can work with NASA to develop a great big Dyson Vacuum attached to an oil tanker. Float that monkey around the gulf a few times.

6. Huggies and Pampers Unite! – In an unprecedented joint- venture the world’s largest brands of consumer goods team up to create giant Pamper- Huggies disposable diapers. If Huggies and Pampers are good enough for a pooping baby then perhaps if giant joint-venture produced diapers were placed strategically around the spill…

5. Giant Q -Tip – Obvious just shove one of those in there they’ll never get it out.

4. Chinese Government Recycling Project – Remember our dog food crisis when all kinds of material ended up in that goopy mixture of Gluten swill imported from China? The Chinese government will gladly clean up the spill and sell the contents back to us in the form of baby toys and formulas.

3. Brawny Paper towels – The singing Brawny spokes cartoon and his extra strong paper towels can mop it up and still hold a cup of coffee without spilling! Especially with their new television ad jingle “Lean on me….call on me brother when you need a hand.”

2. Rush Limbaugh – Rush stated in a recent broadcast from the EIB network that “the oil will simply evaporate.” Insinuating that “state run media” has turned this into a political issue for the Obama Administration declaring, “These people will stop at nothing.”

1. Gov. David Patterson – Has arrived on the scene concerned that the oil might make it to Manhattan. Plans are already in place to scoop up the renegade oil slick and pump it to our now shuttered state parks. “Spreading the oil on our state parks will reduce the need for cutting grass and shrubbery. Until the legislature decides on a budget I will do everything in my powers to save money for the people of New York.”