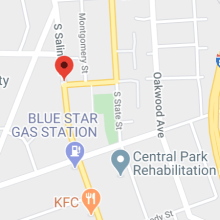 Syracuse, N.Y. — The City of Syracuse Department of Engineering announced that contractors will disconnect and remove the traffic signal at the intersection of S. Salina Street and E. Raynor Avenue on Monday, Aug. 10.

Due to other planned development and street improvements along South Salina Street in the immediate area, the City is evaluating permanent traffic control options for this intersection and others.