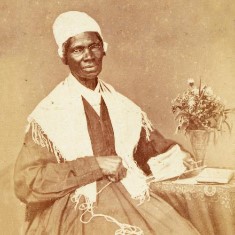 Buildings Across the State, Including One World Trade Center and Niagara Falls, to be Lit Purple and Gold in Honor of Women’s Right to Vote

Governor Andrew M. Cuomo and Lieutenant Governor Kathy Hochul announced on November 6th  that, in honor of the 100th anniversary of women’s suffrage in New York, the State will dedicate and build two statues in commemoration of suffragists Sojourner Truth and Rosalie Gardiner Jones. Women’s suffrage passed on November 6, 1917 in New York, three years before the 19th amendment granted the vote to women across the country. The Governor and Lieutenant Governor also officially proclaimed November 2017 Women’s Suffrage Centennial Month. Text of the proclamation can be viewed here.

“From the suffrage movement’s launch right here in Seneca Falls to the historic Women’s Equality Agenda, New York leads the nation in fighting for women’s rights, and we are proud to celebrate the 100th anniversary of women’s suffrage in our state and the bravery and perseverance of the women who paved the way,” Governor Cuomo said. “As we recognize this important milestone in our history and reflect on how much progress has been made over the last century, we know we cannot rest as we continue to fight for true equality.”

“People in cities across the state looked to the skies, which were lit up in purple and gold, and feel pride in our history,” said Lieutenant Governor Hochul, Chair of the Women’s Suffrage Commission. “At the same time, as the state’s highest ranking elected woman and the Chair of the Commission celebrating this historic occasion, I am inspired by the next generation of young women who will carry the torch and fulfill our vision of equality and create a culture of respect and inclusion for all women, regardless of race, ethnicity, gender at birth, or sexual orientation.” 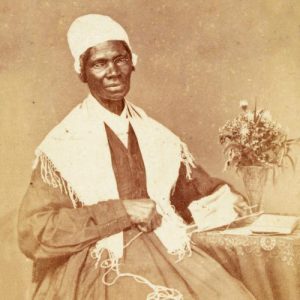 The statue of Sojourner Truth will be sited on the Empire State Trail in Ulster County, where she was born.  Truth was born into slavery circa 1797, sold three times, and ultimately escaped to freedom in 1826.  She went on to became a noted abolitionist and women’s rights advocate until her death in 1883.

The statue of Rosalie Gardiner Jones will be built in Cold Spring Harbor State Park on Long Island. Known as “General Jones,” she was born and lived in Cold Spring Harbor and was respected for leading suffrage “pilgrims” on marches from New York City to Albany and Washington, DC in support of women’s suffrage.

The State will issue a call for submissions to select the designs of each statue. There are currently 25 statues on New York State property, including only two women: Dr. Mary Walker, a civil war surgeon, in Oswego; and frontierswoman Mary Jemison in Letchworth State Park.  With the addition of the new statues of Truth and Jones, the total number of statues of women on New York State property will double to four.

Buildings to be Lit Purple and Gold

The Governor and Lieutenant Governor announced that buildings across New York State would be lit up purple and gold, the colors of the suffrage movement, celebrating the anniversary as well. The full list of buildings that participated is below:

On the evening of November 6th, Lieutenant Governor Hochul and the New York State Women’s Suffrage Commission held a celebration of the New York Suffrage Centennial.  The event was a collaboration with SAP Next-Gen at the SAP Leonardo Center New York where, from the 48th floor of Hudson Yards, attendees will have a panoramic view of New York City with the World Trade Center and other historic buildings lit up in the suffrage colors purple and gold.

Special commemorative “I Voted” stickers were distributed at polling locations across the state tomorrow on Election Day. The winning sticker design was selected by popular vote in September. The sticker features “General” Rosalie Jones, a New York Suffragist and organizer who led a 150-mile hike from NYC to Albany in December of 1912 to present a petition to then Governor-Elect Sulzer. Voters were encouraged to share pictures of their “I voted” sticker on social media using the hashtag #NYWomenLead. 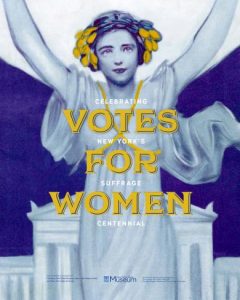 New York State is the home of the women’s rights movement. It hosted the first-ever Women’s Rights Convention at Seneca Falls in 1848, organized by Lucretia Mott and Elizabeth Cady Stanton. Sixty-nine years later, on November 6, 1917, women in New York State secured the right to vote. Three years later, the 19th Amendment was ratified, granting women across the United States the right to vote.

It was at Seneca Falls that the foundational document for women’s rights in the United States – the Declaration of Sentiments – was ratified. Unfortunately, the original copy of the document is missing. In 2015, President Obama set forth an initiative to challenge the public to find the missing Declaration of Sentiments. Today, together with former US Chief Technology Officer and Buffalo native, Megan Smith, we are relaunching the challenge to #FindtheSentiments and calling on New Yorkers to look for the Sentiments in their archives and storage, as well as in their hearts and minds. Learn more at: ny.gov/FindtheSentiments.

The New York State Women’s Suffrage Commission, chaired by Lieutenant Governor Kathy Hochul, is organizing programs to commemorate women’s suffrage between 2017, 100 years from when women won the right to vote in New York State, and 2020, which will be a century after the 19th Amendment was ratified. The Commission’s programs celebrate the accomplishment of women’s suffrage and the central role of New Yorkers and New York State in this milestone, while also helping shape the future to ensure a more just and equitable society for all. To learn more, visit www.ny.gov/suffrage.