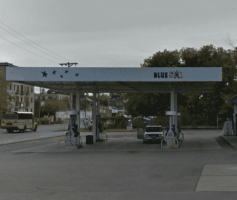 On Thursday, June 25th, 2020, at around 7:26 A.M., Officers responded to the Blue Star Gas Station located at 1410 S. Salina St. for an assault call. Upon arrival, Officers encountered Michael Kellam, 46, who had just assaulted a 31-year-old male victim.

The Officers approached Kellam and placed him under arrest. As Kellam was handcuffed, he began to violently resist two Officers, Jason Caceres and Daniel Fahey, who were trying to maintain control. During the struggle, Kellam headbutted both Officers causing injuries. The Officers were eventually able to contain Kellam.

Kellam was subsequently transported to the Justice Center and arrested for Assault in the Third Degree for the original victim, two counts of Assault in the Second Degree for injuries caused to the Officers, Criminal Mischief in the Fourth Degree, and Resisting Arrest.

Both Officers were transported to Upstate Hospital for treatment. One having a laceration to the head and the other for bruising to the head.