This multimedia group exhibition explores the convergences between South Africa’s struggle against Apartheid and the US Civil Rights movement struggle for voting rights through the Tyler Gallery’s joint collaboration with ArtRage Gallery and Syracuse Stage. In February, Syracuse Stage hosts an international production of Athol Fugard’s celebrated 1972 play, Sizwe Banzi is Dead. Set in a photographer’s studio, Sizwe Banzi depicts the construction and regulation of identity and how one man sheds this straitjacket. ArtRage Gallery marks the 50th anniversary of the legendary 1965 Selma to Montgomery march with an exhibition of Civil Rights era photographer Matt Herron’s images printed on vinyl banners evoking the spirit of mass protest.

Though oceans separate them, both struggles hinged crucially on how those seeking freedom succeeded in visually defining who they were. On different continents, both struggles overlapped in time and echoed one another’s victories and set-backs too. 1964 saw Nelson Mandela sentenced to life in prison, but the next year saw the Selma marches. 1976 saw Sizwe Banzi‘s original cast members jailed for their performances, but also the Soweto Uprising. Apartheid & Identity explores those historical events as well as the ways in which those struggles persist in our own day and are never truly “over.” 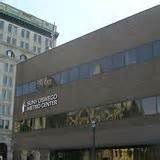 Apartheid & Identity presents sculpture, photography and quilted fabric as well as a variety of specially commissioned performances and screenings of award-winning films. Anchored in the Tyler Art Gallery at SUNY Oswego Metro Center in downtown Syracuse, Apartheid & Identity also visits the main campus for a portion of its programming, thereby joining the spring 2015 series of campus events titled Race, Place, Being.

Race • Place • Being is a semester-long series of performances, speakers, exhibitions, film screenings and other activities that focuses on topics of race and identity within local, national and global contexts and across different eras, times and locations. The purpose of the series is to provide the campus and broader community with opportunities to engage in purposeful dialogue about these topics and to understand the relevance of these issues in the 21st century. 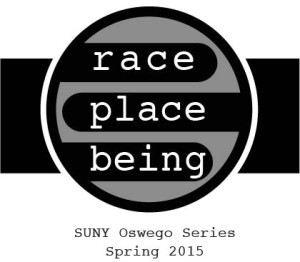 The exhibitions and events in the series will take place in a number of venues on campus and throughout Central New York — at SUNY Oswego’s Metro Center in downtown Syracuse, ArtRage Gallery and Syracuse Stage in Syracuse. Some performances, film screenings and exhibitions will call attention to specific events of the past — such as resistances to apartheid in South Africa and the Civil Rights protest marches in the United States in Selma, Alabama and elsewhere — to invite conversations about the lessons of history and their importance today in light of the current cultural climate both here and abroad. (See our forthcoming calendar of events for details.)

This semester-long series, encourages faculty, staff, students, alumni and the greater community to participate in these events, performances, exhibitions and timely conversations on race, place and being. (Click on images below to enlarge) 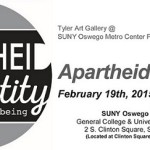 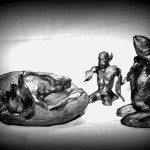 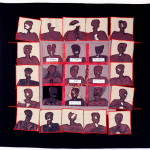 Now, I am a Man Ellen M. Blalock, qulited and burned fabric with bullet casing 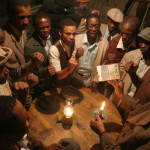 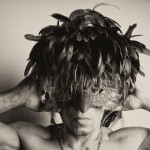 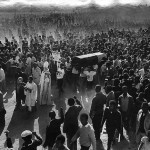 Syracuse photojournalist Mike Greenlar was in South Africa in July 1985.

Screening of his documentary on South Africa
Cry of Reason (1988)

All events are free and open to the public

Co-curated by Amy E. Bartell and Nancy Keefe Rhodes
Thanks to Auxiliary Services and Artswego
*

A portion of this exhibition is funded by a grant from CNY Arts
*
Special acknowledgement to SUNY Oswego students
for their exemplary work in promotion, social media, graphic design,
presentation and exhibition installation.