Syracuse University will honor Veterans Day with an evening of readings by members of the Syracuse Veterans’ Writing Group (SVWG). The event, which addresses the enduring effects of war, including moral injury, features original poetry and nonfiction by seven local U.S. veterans.

A Veterans Day Reading “What Were You Carrying Then, What Do You Carry Now?”  will be held on Wednesday, Nov. 11, at 7:00-8:30 p.m. in room 207 of the Hall of Languages. The event is free and open to the public. For more information, contact Eileen Schell, Associate Professor of Writing and Rhetoric and founder and co-facilitator of the SVWG, at eeschell@syr.edu <mailto:eeschell@syr.edu>  or 315-443-5146. 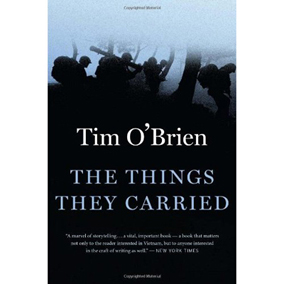 “This year’s Veterans Day reading is inspired by a chapter in Tim O’Brien’s Vietnam war novel The Things They Carried.  O’Brien speaks of the literal and figurative weight carried by troops as they go into combat.  All of the pieces that will be read at the event will take up that theme of what veterans carried when they were active duty service members and what they carry with them now—their memories, burdens, losses, stories, and lingering questions,” said Eileen E. Schell, founder and co-facilitator of the SVWG.

The readers are as follows:

·         Doug D’Elia, Air Force (Vietnam Era, Guam)
·         Jennifer Jeffery, Coast Guard (Multiple tours of duty)
·         Andrew Miller, Army (Operation Enduring Freedom, Afghanistan)
·         Terry Mitchell, Army and Army Reserves (tours of Vietnam, Somalia, Bosnia, and Iraq)
·         Ginger Peterman, Army (Iraq War)
·         Don Western, Marine Corps (Vietnam War)
·         Ralph Willsey, Army (Iraq War)
According to the Department of Veterans Affairs, there were 22 million military veterans last year in the U.S. population. Many veterans return from deployments with questions about what they had to do and what they have experienced. Some suffer from moral injury, defined as “the damage done to one’s conscience when service members perpetrate, witness, or fail to prevent acts that transgress their moral and ethical values,” said Andrew Miller, OEF Veteran and Coordinator of the Moral Injury Project at Hendricks Chapel. “Moral injury is one explanation for why service members and veterans struggle with readjustment and living full, healthy lives. Untreated, moral injury can lead to serious distress, depression and even suicidality. Our Project works with researchers, writers, artists, philosophers and religious scholars to raise awareness and grow our understanding of moral injury.”

“Writing is one way to frame a conversation about those difficulties from service, as well as struggles with readjustment. A public reading on Veterans Day is one way that we can interact with our communities and foster understanding. We invite the public to listen and participate,”  said Miller.

Schell says that the kind of work SVWG does is critical to raising awareness of the experiences of veterans, including the issue of moral injury, and bridging the military-civilian divide

“Many civilians are out of touch with the experience and stories that veterans have to tell.  Fewer and fewer Americans serve in the military.  Our writing group works to bridge the gap and raise awareness and understanding.”