It was a hot sunny day when the members of Upstate Minority Economic Alliance (UMEA) and their sponsors gathered at The Guest House on West Manlius Street in East Syracuse for a good old-fashioned barbeque. This wasn’t just any barbeque, after years of meeting as a group, working on various initiatives it was time to just celebrate in each other’s company.

The food was catered by several minority business enterprises that gave attendees an abundance and variety of food. Heartfelt comments were delivered by UMEA board members including Juanita Perez Williams, a longtime supporter of the organization.

UMEA’s Big Business Barbecue was sponsored by KeyBank Business Boost & Build powered by JumpStart. The summer event showcased an 80’s/90’s theme, including dress code and musical selections by the DJ. 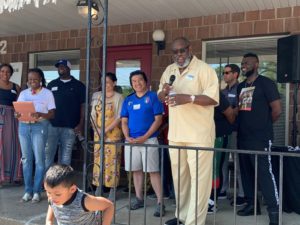 UMEA Board members and Stakeholders addressed the group at The Guest House.

The food included; Southern, Latin/Spanish, Caribbean and Creole-style cuisine. Entrepreneurs participated in a 1:1 Business Exchange. This is a major stepping stone as UMEA’s Members, Resource Partners and Stakeholders networked together for the first time.

According to UMEA Interim Executive Director Me’Shae Rolling, “That was an opportunity for us to introduce our UMEA stakeholders. And we had our partners and stakeholders; they were highly participatory of meeting UMEA’s audience. We thought we’d seize the moment of summer to go to a Black owned space, The Guest House and to recruited some of Syracuse’s Black and Latino caterers. What you saw was just a microcosm of what we have to offer here. We wanted to have a Harlem House party feel, that 1970’s – 80’s vibe.”

There was plenty of food and networking as people enjoyed each other’s company, while talking about their company, how appropriate for a summer business outing.