Syracuse is a city on the verge of a renaissance, a rebirth, a city reinventing itself. We’ve seen this in the number of projects being built or on the drawing boards. We’ve seen an explosive increase in the construction of residential units in both downtown Syracuse and the University Hill areas. 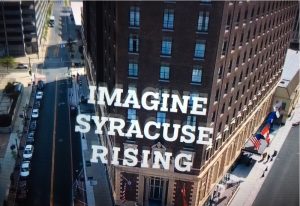 Which means, the next Mayor is going to be presented with a set of challenges, as it relates to our ability to generate opportunities for those who have been left behind.  How we deal with our oppressive poverty problem, is going to determine our future as a city.  We can build hundreds of units with gleaming stainless steel appliances and granite counter tops, pet friendly environments complete with amenities.   However, if we don’t tackle our poverty problem, the city as a whole cannot progress.

That’s why; urbancny.com is endorsing Ben Walsh for Mayor of the city of Syracuse.

During his time working on behalf of the city’s economic development, he displayed his ability to bring people and projects together. Some of these successful projects were built on properties abandoned for decades, now to be turned into much needed shopping; creating entry level jobs in some of our poorest areas. As Ben has stated, he didn’t do any of this alone, but everyone in the room was needed to make the initiative successful.  That’s bringing people together without looking for individual credit.

During this campaign, Ben Walsh presented his plan for an expanded summer youth jobs program to provide career skills and economic opportunity for Syracuse youth. Walsh’s plan would double the current capacity of the CNY Works program, creating 475 new summer job opportunities for Syracuse City youth, aged 14-24, giving them an opportunity to develop valuable work experience that can lead to career opportunities. These job opportunities would now include high-tech firms’ participation.

We need to elect a candidate with peculiar quality, or the sum of qualities, by which they are distinguished from other candidates.

This is why urbancny.com is Endorsing Ben Walsh. He is asking us to, “Imagine Syracuse Rising”, offering the brightest hope, urging us all to Rise Above. On Election Day, let’s all “Rise Above” and make Ben Walsh, the next Mayor of Syracuse, New York.